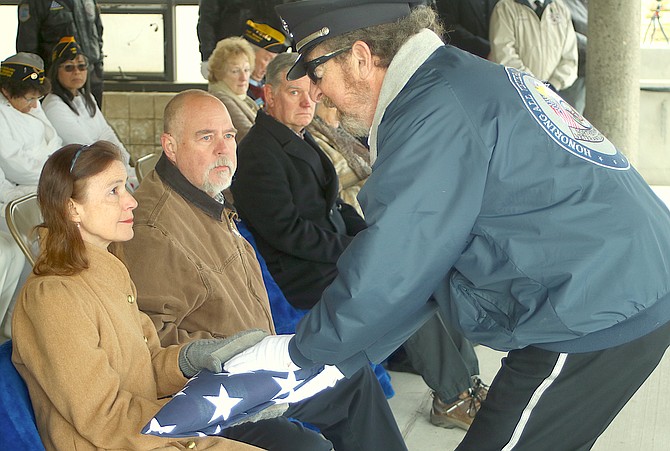 David Rifkin, right, of the Nevada Veterans Coalition, presents a U.S. flag that was draped over John (Jack) Delaney’s casket to his daughter Marion Driscoll during a military service at the Northern Nevada Veterans Memorial Cemetery in Fernley on Monday. Sitting next to Driscoll is her brother, Tim Delaney.
Photo by Steve Ranson.

VHRs are not an entitlement

Dear Vacation Home Rental owners, you must understand this is not an entitlement: the fact of having a right to something.

What a shame to have a lawsuit ensue so quickly. I am hoping ordinance language and amendment will be introduced so that the cap cannot be challenged through any future lawsuit. Rather it should be brought forward as a staff or advisory board recommendation to the Planning and Board of County Commissioners after the program has been analyzed for at least a year to determine its validity.

Kudos! County Commissioners for standing up unanimously and not approving the Vacation Home Rental Settlement.

Commend! County Commissioners for putting the litigants on notice. Their shameful behavior should not be rewarded.

Praise! County Commissioners for identifying the litigants seeking personal gain over the betterment for all Douglas County residents.

Respect! County Commissioners for your choice to take this to the next level where the County should prevail.

Many thanks! to Staff, the District Attorneys, Planning and Board of County Commissioners, the Public that engaged, the Enforcement Team, the Fire and Law Enforcement agencies for their diligence in grasping the escalated issues surrounding VHRs.

Proud! that Douglas County has successfully set the benchmark for other jurisdictions to follow with stringent rules that will be enforced with additional staff that have been hired and trained. As well as steep fines that are meaningful and a clearly written ordinance for VHR permit holders to follow. This ordinance will evolve as necessary.

Now is the time to let the ink dry on the ordinance so we can proceed and actually see how the enforcement plays out. This has been a monumental effort to get us here today.

With the election of Mark Gardner as chairman and Wes Rice as vice chair, the Board of Commissioners has taken a positive step in providing a good opportunity for the future success of Douglas County.

2021 too often saw disjointed board meetings, failure to follow proper procedure, a lack of focus, and disregard for civility. Gardner, in his opening statement, pledged civility and fairness to all. His conduct during the last year gives ample evidence of his willingness to adhere to this important principle.

Gardner comes to meetings well-prepared, listens carefully, and makes good decisions after hearing all the information. I have confidence he will use those talents to become an effective chairman.

Let me also thank Commissioner Tarkanian for the enthusiasm he has displayed during his first year in office. Thank you to Commissioners Engels and Nowosad for their service not only to our county but their military service to our country.

These are my personal views, not as a member of the Planning Commission.

I consider myself an ardent advocate of allowing “sleeping dogs lie.” In fact, eons ago I gave up even dreaming that I would ever receive an apology for the abhorrent, abusive treatment I experienced at a county commissioner meeting by one of the commissioners. However, at the Jan. 6 meeting, that certain commissioner chose to kick that dog awake and that dog bites back. In a very faintly veiled comment as to whom he was referring to, Commissioner Engels accused me of calling him a liar.

Fortunately for me, the public comment segment of the meeting was still open, I had the opportunity to refute that statement at that time.

It is hard to imagine that some of today’s politicians forget that everything said and done, is recorded, to be found on YouTube. Even after two years that incident is still available for viewing.

The description below the video states:

“Douglas County Commissioner John Engels goes crazy, berating and bullying innocent female resident during public comment in commission meeting. He has to be warned multiple times by the District Attorney and other commissioners to stop.”

I believe that it will be found that I did not call Commissioner Engels a “liar” and that I actually referred to him multiple times as “sir.”

I would hope that this clarification will put this incident to bed along with the dog.

Thank you to those that took the time to view the YouTube video. (it is brief)

Regarding Alice Meyers letter to the editor (Jan. 6, 2022 RC), it is astounding that the so-called “coup” did not triumph on Jan. 6, with all the carefully planned steps the Republicans supposedly took to overturn the 2020 election. Despite the best efforts of the partisan Jan. 6 committee, the average American can see from the footage that has been released, that this was not an “armed insurrection” but a protest gone horribly wrong, and has been condemned by Republicans and Democrats alike.

As Meyers might recall though, the temperature of this country regarding elections has been ramping up for some time now. We still hear Hillary saying the 2016 election was stolen from her, and heard for four years from Democratic senators claiming Trump was an illegitimate president. At that time, the voting machines were blamed for the results and also that mail-in ballots were fraudulent (sound familiar)? So instead of working to ensure all Americans have confidence in the election process and can feel that each vote counts, the Democrats are doubling down on H.R. 1, the “For the People Act.” This bill would change our election system forever, under the guise of “strengthening” the laws. I encourage everyone to check out www.heritage.org for the facts on H.R.1. There is also some interesting information on how Nevada scores on election integrity thanks to our Democrat legislature and governor. Also contact U.S. Sens. Rosen and Cortez Masto, to let them know that the national elections should not be federalized. We need to keep our election process transparent and secure so that all American citizens can trust the results.