Three men arrested for soliciting minors on internet for sex 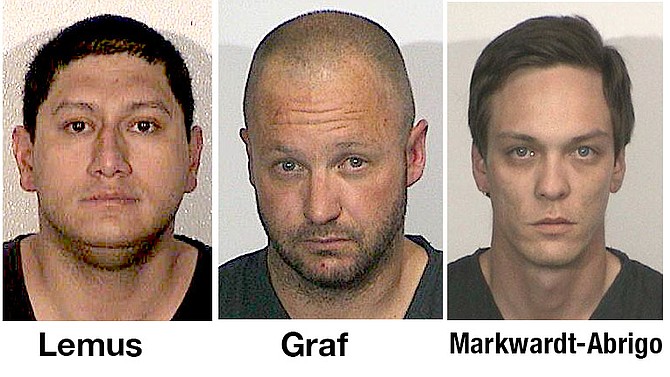 One of three men arrested Friday in what authorities describe as a human trafficking operation in Stateline remains in custody on Monday.

South Lake Tahoe resident Jonathan Lemus, 43, is being held on $26,000 bail on charges of solicitation of a minor for prostitution and attempted child abuse for sexual exploitation.

Also arrested on Friday were Wellington resident Adam Graf, 47, and Dayton resident James Markwardt-Abrigo, 29. Graf faces the same charges as Lemus. Markwardt-Abrigo faces charges of luring a child with a computer device, attempted lewdness with a child under the age of 16, attempted statutory sexual seduction by someone over the age of 21, in addition to the solicitation and exploitation charges.

According to the Sheriff’s Office, all three contacted undercover detectives believing they were underage minors for the purpose of having sex with the minors. The operation occurred in the casino core of Stateline.

“We are always looking for signs of Human trafficking we usually run at least one or two prostitution stings a year,” Sheriff Dan Coverley said on Monday. “This is the first one with HEAT, who also provided training to us specific to human trafficking and prostitution involving minors. The Douglas County Sheriff’s Office will continue to aggressively investigate Human Trafficking and Child Prostitution and will work with our regional partners to continue fight this type of heinous crime, and protect our children.”