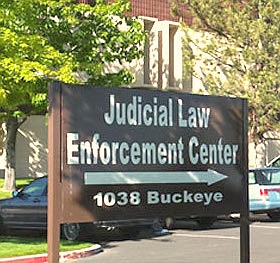 A Wellington man appears to have run out of gasoline near where he was shot and killed early May 4.

David Francis, 34, was shot by a homeowner on Topaz Ranch Drive after residents were awakened by someone banging on their windows.

There is no indication that Francis knew the occupants of the home, according to the Sheriff’s Office.

Undersheriff Ron Elges said the case has been referred to the Douglas County District Attorney’s Office to determine whether the shooting was justified.

Francis allegedly came through the sliding glass door at around 6 a.m. and was shot by the resident with a .45 pistol.
He retreated to his vehicle but collapsed in the driveway, where he succumbed to the gunshot wound.
A second man who was shot when he entered someone else’s home is scheduled to appear in East Fork Justice Court today.

Christian Henessey Gorham is facing a burglary charge after he was shot in the shoulder.

Gorham was shot after he entered a Gardnerville Ranchos home on May 5 in an incident that was strikingly similar to the one that resulted in Francis’ death.

Some will learn the hard way & some won't get a second chance. This should be a deterrent especially in Douglas!