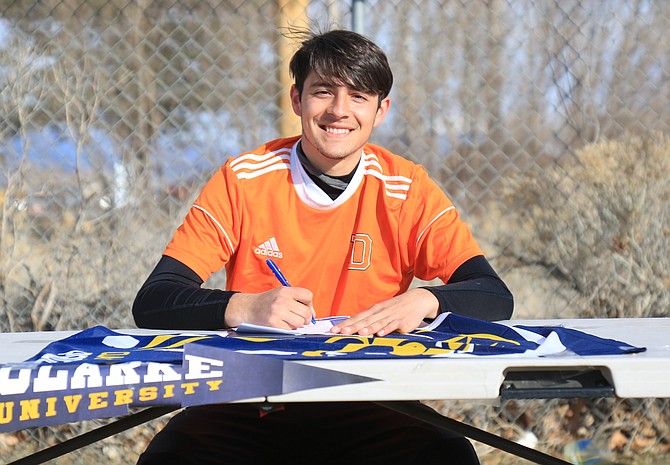 Ricky Diaz wasn’t going to let an initial lack of opportunities deter him.
The Douglas High senior didn’t originally have what he was looking for to continue his soccer career.
However, after playing in Surf Cup in San Diego, Diaz heard from the Clarke University men’s program.
At first glance, Iowa was a long way from home and Diaz’s confidence in himself carried him to seek out the best offer available.
After some more digging into potential future plans, Diaz realized that heading east to Dubuque, Iowa was his best fit.

“I wasn’t really interested in Iowa because it’s really far away,” said Diaz about his early recruitment. “…Then I looked back at Clarke and they had everything I wanted. They had physical therapy. It felt like a great fit for me and now I’ve got my next four years planned out in life.”

Iowa may be a long way from home for the soon-to-be outgoing Douglas High senior, but he won’t be making his venture to the Midwest alone.

His sister, Vaneza, is a freshman on the women’s team at Clarke and the Diaz’s have additional family in the area for the Northern Nevada transplants.

The familial aspect made the 1,800-mile move a little less daunting, including having his older sister nearby.

“It did have a little influence on me. She’ll be there when I need her, but if I don’t want to see her, not to be rude or anything, but I don’t have to see her,” laughed Ricky Diaz.

Along with having family on campus, Diaz is looking forward to getting a chance to continue spending holidays with family while also pursuing his aspirations.

“The thought of having thanksgiving by myself or with friends wouldn’t be the same,” said Diaz. “There is nothing better than family. You can always count on them when you need too.”

Once he steps foot near the western banks of the Mississippi River, Diaz plans to keep his academic studies in the sports realm and pursue physical therapy.

“That’s definitely the route I’m looking forward to because I want to help athletes become 100% after they’re injured,” Diaz said.

With a six-week senior season set to kick off Saturday, Diaz added that the decision brought a lot of peace of mind.

“My whole life I’ve ben working up to this point and once I actually made it, it felt like a 1,000-pound weight just came off my chest. I know I made it to the next level and I feel really grateful for that, to get noticed.”