Doughty thriving on the softball diamond at MSU Denver 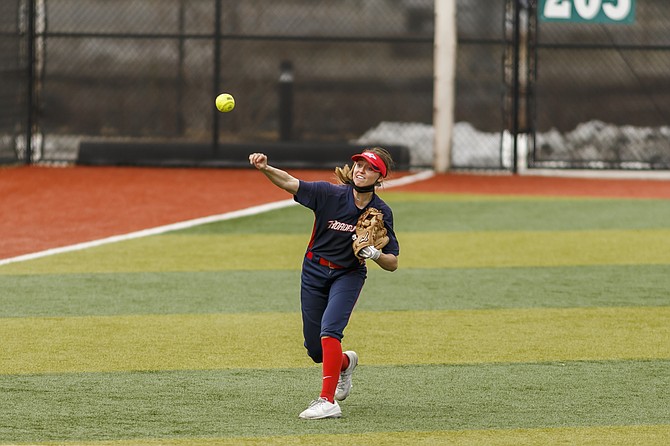 Douglas High graduate and MSU-Denver sophomore Haley Doughty fires in a throw from the outfield in a contest earlier this season. Though usually in a middle infielder role, Doughty has found quite a bit of success with the Roadrunners. Courtesy Edward Jacobs, Jr.

Haley Doughty is in the midst of her sophomore season at Metropolitan State University of Denver and has blossomed into a steady, reliable middle infielder for the Roadrunners.
Though up-the-middle defenders may not be typically regarded as some of the most powerful hitters at the plate, Doughty has seen her physical tools adjust well at the Division II level.
“I think the biggest gap is a mental maturity between the games,” said Doughty. “The margin for error mentally is pretty small. Girls are very, very serious.”
As a freshman, Doughty was forced to manage expectations and put in more work to consistently keep her position in the everyday lineup.
Now, she’s second on the team in home runs with five this season, while hitting .300 at the plate and has helped the Roadrunner work to a 22-8 record through their first 30 games.

Using her tools
Taking a seat on the bench as a freshman was a new experience for Doughty.
As a senior at Douglas, Doughty hit .477 and was on base over 52 percent of time she stepped to the plate.
As a college freshman, she hit. 286 but both her and her coach feel she just needed time to adjust with her game.
“When Haley came in, we knew she could swing the bat,” said MSU Denver head coach Annie Van Wetzinga. “She is kind of a slender build, but because of her lankiness she really creates some good whip and leverage. When she hits the ball it jumps off her bat.”
For Doughty, finding her own rhythm was the difference maker.

“Where I’ve had decent success in these past couple of weeks, I’ve also had my slumps,” said Doughty. “I’ve rode a little bit more bench than I was ever used to, but it has given me a little more perspective on the team environment.”

As a freshman, one of her two homers is regarded as one of the furthest home seen at their home park.

“We’re in downtown Denver and there is a billboard just beyond our outfield fence. It’s up really high and on a long, big pole,” Van Wetzinga said. “She hit it probably two-thirds of the way up the pole. That’s what she does, especially when she turns on the ball.”

Doughty said she didn’t realize how far the home run traveled until watching it back on tape.

Defensively, Doughty has made just one error to this point of the season.

A history major with intentions of becoming a teacher, Doughty hasn’t ruled out following in the coaching footsteps of some of her immediately family.

For now, the sophomore is focused on continuing her hot play on the field and helping lead MSU Denver to its first Rocky Mountain Athletic Conference title since 2016.