An opportunity to get noticed 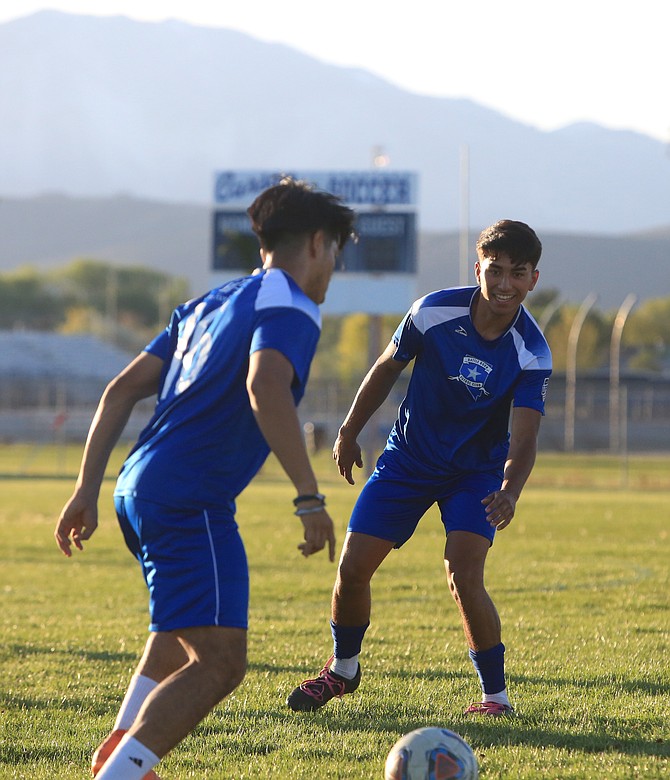 Isael Lopez smiles as he works through a drill with his Battle Born FC teammates Tuesday evening on Carson High's practice field. Lopez and the rest of the roster are eager to take advantage of an opportunity to showcase their skills at the semi-professional level. Photo by Carter Eckl.

Carson City’s newest semi-professional soccer club, Battle Born FC, has a roster full of local talent sprinkled in with a little diversity.
Upwards of a dozen players on the roster have grown under the tutelage of local coach Frank Martinez, who has a number of soccer connections to the area as the Carson High boy’s soccer coach and Puma’s club coach.
Other players on the roster are from Northern Nevada, but are still beginning to learn how to mesh with a group of teammates that are all familiar with each other.
“I think we are getting to the point now where everyone is starting to learn how to play with each other,” said Robert Rupp, a 2014 Whittell High School graduate.
Rupp played collegiate soccer at UC San Diego before graduating and going into the workforce.
However, Battle Born FC provided a unique opportunity for one of team’s older players to be a part of something new.
“I had actually not played for a while because I was just working. There’s not too many opportunities to play soccer around here,” said Rupp. “So I saw this and wanted to take advantage of it.”

Out and running
With the club’s home opener two weeks away, a number of players are walking down memory lane practicing at Carson High, on the practice field.
“It feels kind of weird, especially practicing on Carson’s field. It brings back memories,” said 2017 Carson High grad Guillermo Hernandez, who played on the 2015 Carson High team that won a state title. “Of course, I think about that title.”
The home opener May 29 and 30 against the Boise Cutthroats and Kongo FC, respectively, will be played on Carson’s practice field at the back of the school.
With so many members of the club having in-depth knowledge of each other’s play styles, it’s made the transition to on-field play a relatively quick one.
The results have followed, too.
The club is 3-1 through its first four games, all of which were played in Utah.
Battle Born FC is sporting a plus-8 goal differential through its first four games, in part due to a 9-0 win.
Hernandez already has a game-winning goal under his belt and fellow former Carson High teammate Isael Lopez was eager to be in the mix as well.

“It’s nice to go back to your old roots, a lot of nice memories on this field,” said Lopez, who has been playing collegiate soccer since graduating. “The fitness is key, not stopping playing.”

Staying in shape is a priority for the players who plan on returning to play collegiate soccer after the summer, but for players like Junior Mahi, the opportunity could be life changing.

Mahi was born in Paris, France before moving to Nevada in 2018.

The 22-year-old was playing through youth academies in Europe before his family decided to move to the United States.

Mahi said, along with the pandemic, one of the biggest challenges has been recovering from a broken leg he suffered in a game when he was 17.

“I was home for one year and I stayed home with nothing to do. I thought about giving up on soccer,” Mahi said.

In his eyes, it’s a blessing to be where he is now.

Angel Hernandez is playing for Battle Born FC after a year of playing professionally in Guadalajara, Mexico.

Hernandez has trained under Martinez since he was six, but opted for a professional opportunity in Mexico prior to the pandemic.

“My family is actually from there. That was my first time playing professionally in front of my family,” Hernandez said. “I am here looking for an opportunity, … I have nowhere else to go, so I figured I would try it out.”

It’ll be a season-long experiment in growing chemistry, but the players of Battle Born FC are confident they can make an impact.

A few didn’t believe they could showcase results in such a fashion this early in the club’s history.

After starting 3-1, the whole club has quickly turned its sights from getting off the ground to getting into the postseason.