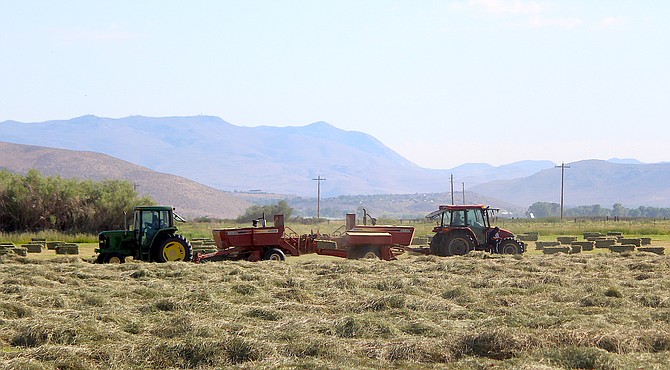 Ranchers below Genoa cut and bale the hay crop on Tuesday. Fields across Carson Valley are seeing the first cutting harvested.

All the fireworks will be Mother Nature’s today as thunderstorms are forecast for Carson Valley.

Unlike last week’s storms, there might be some moisture associated with the storms that could bring locally heavy rain and flooding.

On the other side, the heat will likely return to most of the West starting Sunday and lasting through the week, with highs forecast in the lower 100s.

“These could eclipse records Sunday through Wednesday,” forecasters said. “Confidence is high in heat health impacts especially for those (who are) outdoors for extended periods of time and for vulnerable populations such as the elderly and homeless.”

The fire was likely set by a lightning storm last week that saw two-dozen strikes in eastern Douglas County. When the wind picked up on Monday, it started smoking around 3 p.m.

East Fork firefighters responded to a report of a lightning strike and smoke around 5:30 p.m. Friday above the Johnson Lane Sandpits.

While firefighters were unable to locate any fire as a result of the strike, a couple of trees were reported on fire in the Pine Nuts on Saturday. Both fires were limited to less than a tenth of an acre and were out pretty much as soon as firefighters were able to reach them.

Electrical storms could bring the possibility of power outages with them.

Started on a blustery day by two teenagers dipping lizards in gasoline and releasing them into the brush, the fire threatened the Ridge Tahoe as it charged up the mountainside.

That fire would have cost $5.9 million using current figures.

At the time, Western Nevada had seen two wet years in a row after an eight-year drought.

A quarter century later Western Nevada hasn’t had two wet years, but forecasters say the mountains are fairly dry with chances of ignition running around 60 percent.