Other shoe yet to drop from 2021 Legislature 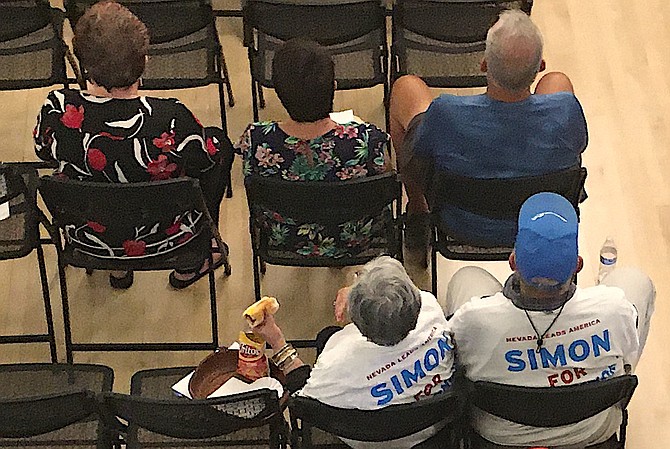 The most significant change in Nevada's political landscape has yet to occur.
On Wednesday, Sen. James Settelmeyer told a town hall organized by the Douglas County Republican Central Committee that redistricting could cost the county representation in the Legislature.
He said he'd seen unofficial Census numbers that indicated Clark County had grown significantly in the last decade compared to the rest of the state.
Because he has reached his 12-year term limit, Settelmeyer said it's likely that lawmakers will move that seat south unless they decide to expand the number of seats in the senate.
Official redistricting numbers weren't available from the U.S. Census before the end of the legislative session, requiring a special session sometime after the Census releases figures in August and September.
Most of the major changes to how Nevada runs elections approved by the Legislature won’t take effect until 2024.

The primary election will continue to be held in June, with the date set for June 14, according to the Secretary of State’s web site.

The Republican primary for governor is already shaping up to be a crowded one, with Douglas County resident Fred Simon first to announce he plans to seek the office.

With Douglas County’s significant Republican majority, most partisan races are essentially resolved in the primary.

Last week Clerk-Treasurer Amy Burgans described the changes in Nevada election law as a result of the 2021 Nevada Legislature.

She said that Assembly Bill 321 requires that a ballot be mailed to all active registered voters in every election.

Voters will have 60 days to opt out of receiving a mailed ballot, but that won’t be available until Jan. 1, 2022.

“There will be drop boxes at every polling place, very similar to what we did in November,” she said.

She said that under the new law, the clerks may start counting ballots 15 days before the election.

“The extra time to count those will help get results out faster,” she said.

Burgans said she didn’t have any concerns about the county’s Dominion voting machines.

The machines are not connected directly to the Internet in any way and they use a thumb drive that is downloaded to a secure network.

There is only one machine that transmits results to the Secretary of State’s Office and the county publishes its result independently of the state.

The voting machines have a paper receipt that a voter may review before it is stored to confirm the vote is what the voter intended.

It won’t be until 2024 that the biggest changes will be made in Nevada’s election rules.

Chief among those rules is a presidential preference primary to be conducted the first Tuesday in February, adding a third election to the regular primary and the general elections.

It has been 40 years since Nevada last held a presidential primary. Since then, the state has conducted caucuses which are at each parties’ expense.

There is a question on how that third primary will be paid for. Burgans said the bill says the state will pay for the primary, but what that means has yet to be worked out.

Of more concern is the expansion of automatic voter registration from the DMV to other state agencies.

Under Assembly Bill 432, Burgans said that any state agency that receives an application of some sort will automatically register residents to vote.

Burgans said the DMV sends around 1,000 registrations to the county every month. Should the bill take effect in 2024, the county would see an increase in those automatic registrations but will also be required to send the new voters a packet “immediately.”

“Once again here’s another unfunded mandate that will be a tremendous burden on every rural county in the state,” Commissioner Wes Rice said.

At present when people register to vote they are required to sign that they are qualified to vote under penalty of perjury.

Nevada is one of a handful of states where the counties do most of the voter registration and send them to the Secretary of State’s Office.

Assembly Bill 422 requires the state to develop a centralized system by 2024. Burgans said the effort has been in the works for some time.

She said the state’s election officials are working on a risk limiting audit.