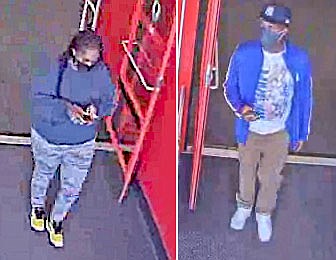 Two people are sought in connection with a Cave Rock Trailhead vehicle burglary.

The Douglas County Sheriff’s Office is asking for the public’s assistance to identify two people believed to be involved in a vehicle burglary and the fraudulent use of a credit card.

During the day on May 24, a vehicle was broken into at the Cave Rock Trailhead. A purse with several credit cards was stolen. A short time later, the stolen credit cards were used at the Walmart and Target in Northern Douglas County.

All other leads have been exhausted in this case and Sheriff’s Office is now seeking the public’s assistance.

Contact Investigator Brandon Williamson at 775-586-7253 with any information relating to the identity of the suspects.

• An ex-felon who came out of his Topaz Ranch Estates home with a shotgun the weekend before Christmas admitted to a gross misdemeanor on Tuesday.

Timothy Paul Heller, 64, was convicted of a 1999 assault in Washington state.

He told District Judge Tod Young that he’d been told he could have a firearm after 10 years, and that it had been more than 15 years. There are states that restore felons right to firearms, generally for nonviolent offenses.

Heller is scheduled to be sentenced July 13. Under an agreement with prosecutors his 364-day sentence would be suspended on condition he signed an affidavit that he has given up his guns and not contact his neighbors.

• A Wellington man admitted to gross misdemeanor attempted violation of an extended stalking order on Tuesday.

Warren Stanley Brakebill, 39, changed his plea and his trial set in July was vacated. The Douglas violation occurred on May 25, 2020.

Brakebill is facing a felony in Carson City in connection with the case and is scheduled to be sentenced on June 28.

Prosecutor Patrick Ferguson said that Carson was doing the heavy lifting in the case.

• A man with felony convictions in Carson City and Lyon County is in Douglas County custody after he was allegedly found with drugs and someone else’s credit cards during a June 3 traffic stop.

Jared Olan Smith, 28, was paroled from prison in October 2020 after serving a sentence for burglary out of Lyon County. He had previously been convicted of home invasion in Carson City in 2014.

His parole is not scheduled to expire until 2022.