Still work to do on the Tamarack Fire 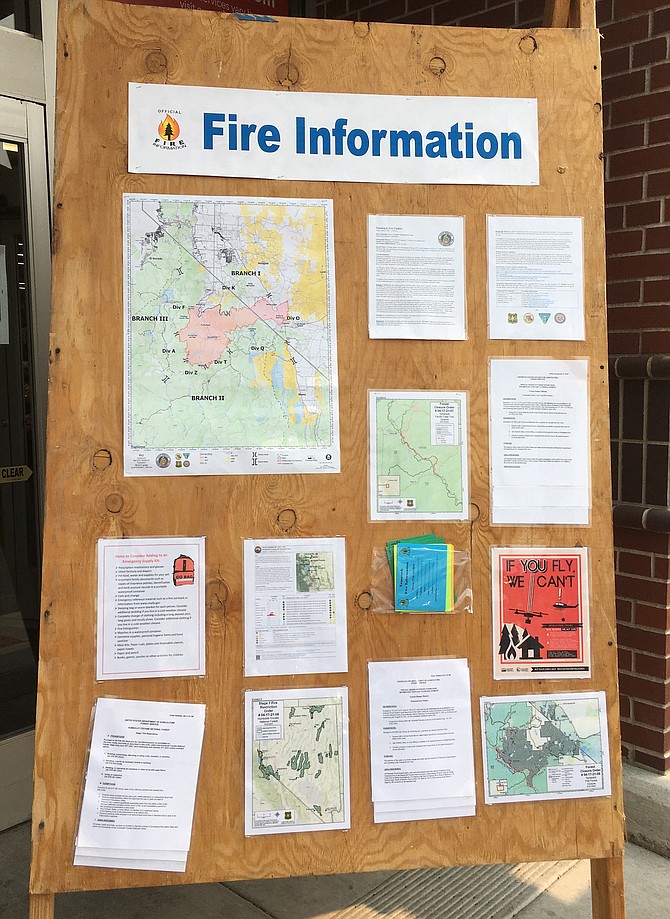 Some old school public information on a board set up at the Gardnerville Raley's dealing with the Tamarack Fire.

Firefighters are focusing their efforts today on the still uncontained southern and western portions of the Tamarack Fire.

Work is continuing to fight the fire from near the junction of highways 89 and 4 around the perimeter to above Shay Creek just over a mile from Blue Lakes Road.

The Blue Lakes area remains the only region evacuated as a result of the fire, which is up to 68,571 acres and 59 percent contained as of Thursday morning.

The Tamarack Fire is estimated to have cost $21.6 million to fight, so far. There are still 10 helicopters and 29 hand crews fighting the fire, along with 52 engines.

Firefighters are asking motorists to avoid traveling through the fire area.

“We strongly encourage members of the public and residents to limit travel near and through the fire area to only essential travel due to continued fire activity,” fire officials said. “Heavy firefighter traffic remains throughout the area and along the roadways, and utility companies are working to restore power.”

NV Energy has been able to restore power to all but 14 homes and businesses along Highway 395 in the Pine Nuts as of Thursday morning. While the company is estimating a 12:45 p.m. restoration of power, that has been delayed several times over the past week. Power went out to the area 5 p.m. July 21 as the fire burned over the highway.

Liberty Utilities reports 48 customers without power in the Markleeville area as a result of the fire.

Thunderstorms are expected to return this afternoon as clouds begin to pile up south of Carson Valley.

Wednesday’s storm brought some wind to the fire area, but nothing that firefighters couldn’t handle.