Update: Power restoration delayed to 5:45 a.m. depending on fire 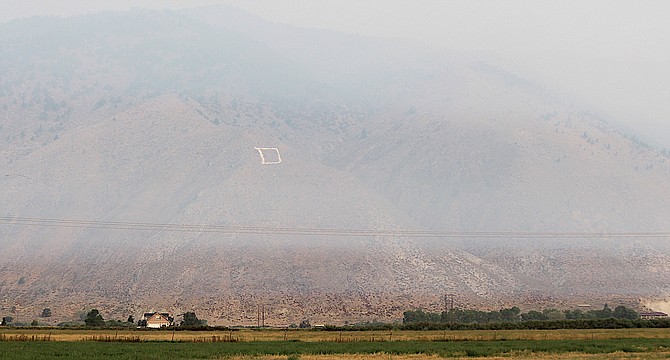 Carson Valley's famous inversion layer kept smoke off the deck for a short while on Sunday.

As of 6 p.m. Friday, power restoration for 1,281 Douglas County NV Energy customers was delayed another 12 hours due to the Tamarack Fire.

Most of those affected are in Topaz Ranch Estates where nvenergy.com says 824 homes and businesses were without power.

Firefighters have asked the power company to shut off power to prevent additional fires or electrocutions.

The power was shut off at 3:30 p.m. Thursday, after the Tamarack Fire burned over Highway 395 sending flames up Gold Hill toward Bald Mountain above Holbrook Junction.

Power along the Highway 395 corridor from Leviathan Mine Road south to Topaz Lake was shut off around 5 p.m., when the fire burned power poles and lines in the region.

On Thursday, firefighters reported a power line down across Highway 395 just north of Holbrook.

The estimated time of restoration to those lines was 5:45 a.m. Saturday, and that's likely to be bumped again in the morning.

Power was also shut off to Liberty Utility customers in Coleville, Walker and Antelope Valley and in Woodfords Canyon at the direction of the Tamarack Fire Incident Command Center.

Both power companies will repair their lines as they have an opportunity to safely enter the fire areas.

A smoke plume from the fire drifted northeast across Carson Valley on Friday morning sending air quality plummeting to unhealthy levels according to the Nevada Department of Environmental Protection’s monitor in Ranchos Aspen Park.

Air quality improved slightly during the morning to unhealthy for sensitive groups, but was forecast to increase in the afternoon.

The quality was still much improved over Thursday’s peak at very unhealthy.

Visibility in Carson Valley, which is critical to air operations on the fire, dropped to four miles around lunchtime Friday, according to Minden-Tahoe Airport.

Forecasters are predicting smoke and haze will continue through the weekend.

“Smoke predominately from the Tamarack, Dixie and Bootleg wildfires continues to bring hazy skies along with poor air quality to the region,” forecasters said in a statement. “The worst conditions remain immediately downwind of the fires.”

Similar conditions are expected through the week. Forecasters advise those in areas with poor air to limit outdoor activity as much as possible.