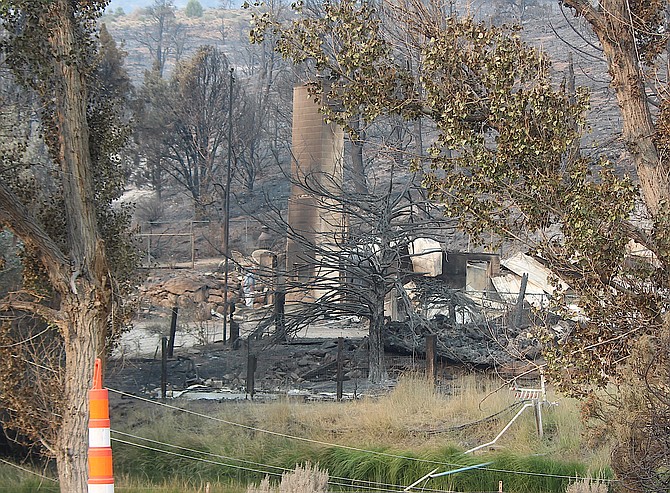 One of the homes destroyed in the Tamarack Fire along Highway 395.
Photo by Kurt Hildebrand.

More than $80,000 is being distributed to the people whose homes were destroyed in the Tamarack Fire.

The money was raised by the Tamarack Turnaround community volunteers, who were seeking a way to help tide over those who lost homes until insurance claims are settled.

“We were honored to have some of the family members that were displaced join us at the event,” Tamarack Turnaround Co-Chairwoman Adele Hoppe

“As we looked out at the crowd, it was evident everyone was enjoying the day.”

Organizers started nearly a month after the fire burned from the Sierra to the Pine Nuts, saying there didn’t seem to be a coordinated effort to aid the victims.

Several GoFundMe accounts had started, including one sponsored by the Alpine County Chamber of Commerce, but Hoppe said she was interested in something based in Douglas.

“I was upset and wanted to help the fire victims, so we decided get involved and wanted to do a fundraiser,” Hoppe said. “We’re just a bunch of caring people.”

At the time, Douglas County did not have a vetted process, nor a designated nonprofit formalized to offer monetary donation management, said Partnership Executive Director Taylor Allison. She said the partnership, which is known for incubating new programs, offered to be the nonprofit partner for the group’s fundraising efforts.

“Our goal was to ensure donations were being received and processed safely and provided directly to individuals that whose homes and belongings were completely destroyed,” Allison said. “Partnership Douglas County and the Tamarack Turnaround cannot thank our generous community enough for rallying together for friends and neighbors in their most vulnerable time of need. Hundreds of donors from business owners and community leaders to private residents contributed to this fire relief effort.”

During a presentation at the Aug. 14, Douglas County Board of Commissioners, Rep. Mark Amodei, R-Nev., said his office was ready to aid residents who were affected by the fire.

“The claims process is not fast,” he warned. “Those folks who suffered damage will end up finding the process takes some patience.”

There have been calls to sue the U.S. Forest Service for not extinguishing the fire when it was first found. Before any lawsuit can be filed, residents will have to file a claim with the federal government.

Started by lightning and first reported on July 4, the fire smoldered in the Sierra for a dozen days before exploding into flame on July 16. Two-thirds of the population of Alpine County was evacuated ahead of the fire which swept down Pleasant Valley menacing Markleeville and Woodfords.

The fire moved so fast that in two days, it had claimed the former incident command at Turtle Rock Park and resulted in moving the evacuation center from Woodfords to Gardnerville.

By Sunday morning the fire was rapidly approaching 20,000 acres, with no containment and two days of critical fire danger forecast. Only 517 firefighters were trying to keep the fire from spreading further north, which could have made it into the Carson Range and burned north into Carson Valley near Fredericksburg.

By July 20, it had doubled in size to 39,045 acres, but so had the number of firefighters. By 5:30 p.m. July 21, the fire was visible in the mountains west of Highway 395 as it charged toward the Pine Nuts. The highway was closed and the next day a spot fire began east of the highway as it burned south toward Holbrook Junction, prompting Douglas County commissioners to declare an emergency for the first time during the summer. By the time the fire was brought to heel, it had consumed 14,873 acres in Nevada and 53,823 acres in California. About a dozen homes were destroyed in the fire.

As of Thursday, the Tamarack Fire is only 82 percent contained, far behind even the Caldor Fire’s 98 percent.