July 1, 2021, Record-Courier Letters to the Editor 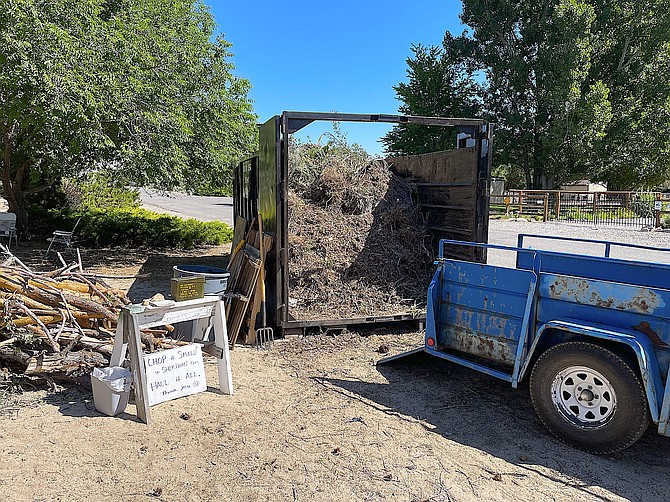 Sheridan residents filled up a big bin with combustibles to reduce fire danger around their homes. Resident Lance Crowley provided this photo.

The neighborhood of Sheridan Acres recently worked together to remove more than 40 cubic yards of combustible brush and would like to thank Douglas Disposal for their ongoing partnership in this effort to stay Fire Safe on the Foothill.

Thanks to all who chipped in.

When will the S-Curve be done?

Each time when I drive past the S-curve I see the little dots where they are going to cut the curve back. It seems they fade back now and then and the send the dauber guy out to repaint them.

Let’s get ‘er done. This is a safety issue. Kids ride bikes around that curve. Must we wait for someone to get hit. I’m thinking of renting a jack hammer and get some cowboys out there on a weekend and get it done.

But that’s no the way it works in this town.

Perhaps the worst Tarkanian performance was the April 1 BOCC meeting at CVIC Hall. The meeting started at 10 a.m., with several important issues to deal with, but had to put off discussion about how to free up Douglas County from the governor’s overreaching COVID protocols until Tarkanian finally showed up around 1 p.m., wearing what appeared to be a red track suit.

Most recently, at the June 14 commissioner meeting, Tarkanian appeared on Zoom, as he’s been doing lately. He was wearing a T-shirt in contrast to the business attire worn by the other four commissioners who were present. During the meetings the problematic Zoom connection, as has happened before, caused questions and comments to be garbled.

Perhaps my district’s representative is under the impression that zooming it in is all that should be required of a local county elected leader. Yet, should he pay more attention, he might realize hearing from his constituents and being available in person for them to address their concerns and gauge his reactions works far better for communication and shared understanding.

Tarkanian has been sending out emails after each meeting presuming to summarize and explain what transpired. I’ve yet to see in any of these an apology or an explanation for disrespecting his constituents. Well, this is one “small town hick” who’s not buying it. Tarkanian should resign and allow a special election that would offer the voters a dedicated civic-minded candidate that would take elective office seriously.

The siren should be silenced

The siren in Minden goes a lot further back than most people realize. Having personally researched it, I collected all the newspaper articles, County Commissioner agendas and minutes, talked to historians, and met with the Tribe regarding the siren. Let’s start back on July 6, 1908, at the County Commissioners meeting when one of the items on the agenda surrounded the indigenous. Here is where the discussion begins: “Complaint having been made from time to time that the Indians are prowling around the streets in the town of Gardnerville – in the evening and at night – disturbing the peace – and trying to procure intoxicating liquor, all of which is against the peace of said town – and detrimental to the inhabitants thereof.” And after their explanation of their powers as the Board of County Commissioners, it was “ordered, the full Board conferring” that “Any and All Indians (except such as are not actually engaged as servants in the town of Gardnerville) remaining within the limits of said town of Gardnerville after sun down of each and every day, are hereby deemed a public nuisance – and detrimental to the County in General, and to the town of Gardnerville in particular. All violations of this ordinance will be prosecuted to the full extend of the law. The Peace Officers of said town are hereby requested to rigidly enforce this ordinance. The limits of said town are as follows . . . “. Then at some point a bell/siren was installed (and not specifically where it is today) and it was for two reasons; the ranchers and for the indigenous to either be on the reservation or be on their way there.

The indigenous worked at the ranches – cooks, maids, babysitters, laundresses, cowboys working in the fields, and a willingness to serve their community as well. The siren still reminds them of generational disrespect, negativity and abuse and members of the Tribe have asked for it to be turned off. They have been met with deaf ears, in lieu of opposition that prefers to leave it for “historical” reasons, and a political stance at this point. Other Letters to the Editor haven’t even mentioned the Tribe. The reason the State is intervening.

A siren in downtown Minden, heard by the immediate surrounding areas only, that goes off at Noon and 6 p.m. seven days a week, 365 days a year does not specifically serve any emergency or safety purpose. To be able to address these historical mistreatments we must first be able acknowledge them, then try to correct them. So, what it comes down to is, is it more important to keep it for “historical” reasons or is it more important to dig a little bit deeper, be empathetic, listen when other people tell us that what we do to them continue to hurt them and do something about it? Reach out further and dig down deeper. Be the loving caring human beings we were meant to be and turn the siren off.

Isn’t there a better way?

Having lived in Europe as a young civilian I agree with Native Americans about the shock felt at the sound of a noontime siren. Surely, we can engineer such a system for a test sound with less shock effect, and still prove that it performs as required much as an emergency vehicle on the road can be heard from a distance before it is close up in busy traffic.

This should not be an all or nothing decision based on an outdated procedure.

Yes, long time ago, IMB facilities had the word 'THINK' on their front door. A little of that in relation to sirens might be useful.

I read with interest the article regarding the proposed bronze wild horse statues along Hwy 395 in Minden and Gardnerville. While the wild horse issue is very emotional and I know not everyone will agree with my opinion it would seem more appropriate to have statues of all things that have been part of the history of Carson Valley and the many hard working people. Cows, sheep, sheepherders, cowboys, cowgirls, tractors and many other things that have contributed to the beauty of Carson Valley rather than horses that truly aren't wild anymore as more and more are cared for by people. The other point that is hard for me to agree with is the price tag. $20,000 would go a long way to help individuals and families in our Valley that are struggling to get by after over a year of lockdown, unemployment and the price of homes and rents continue to soar.

I know I won't be popular but in the words of the great American and patriot the late Charlie Daniels "God give us courage to speak our mind. To be honest and bold about our feelings no matter who or how many we go against."

This is a response to Mr. Paterson's mischaracterization of my letter concerning the future of our democracy. I did not state or imply in my letter about giving non-citizens the right to vote and I did not mention or give an opinion on statehood for the District of Columbia or Puerto Rico. The Georgia Secretary of State recorded his conversation with Trump in which Trump told him to find 11,780 votes he, Trump, needed to win Georgia, easily verifiable. Voter suppression is real and there is data to back it up. For instance, studies have found that Latino voters average wait time is 46 percent longer than white voters, for Black voters their average wait time is 45 percent longer than white voters. In my letter I wrote about voter suppression in general, but voter ID is one of the tools used to suppress the vote. For example, requirement to obtain voter ID from your local DMV and then proceed to close DMV offices in poor and Democratic leaning districts or change the requirement for voter ID to require street addresses knowing that many Native Lands in your state do not have street addresses only P.O. Boxes. Other voter suppression methods are reducing the number of early voting days, reducing the number of voting hours (i.e. Sunday to the Polls early voting), making it a crime to give food or water to a voter waiting in line. The list goes on...

Texas Bill 7 includes a section that would allow a judge to void an outcome if the number of fraudulent votes cast could change the results regardless of whether it was proved the fraud affected the outcome. Basically, no proof of fraud is required to overturn an election.

Mr. Paterson goes on to mention debunked fraud theories, i.e. more votes cast in a district than legal voters. The Michigan Republican controlled state senate issued a report on the 2020 election in their state. They investigated many of the fraud claims raised by Republicans, especially related to Antrim County. Their conclusion, the Michigan 2020 election was a free and fair election and they did not find any fraud that would have changed the outcome of the election. They also recommended that some people should be investigated by the state's attorney general for pushing false claims about the election for their own personal benefit.

I believe all eligible voters should have equal access to voting and all legal votes should be counted, a citizen's right to vote should not be dependent on age (i.e. old better than young), color of skin, wealth or party affiliation. Unfortunately, not all Americans feel that way, a recent poll by a non-partisan group found that 46 percent of Republicans believe it would have been OK to give electoral college votes won by Biden to Trump.