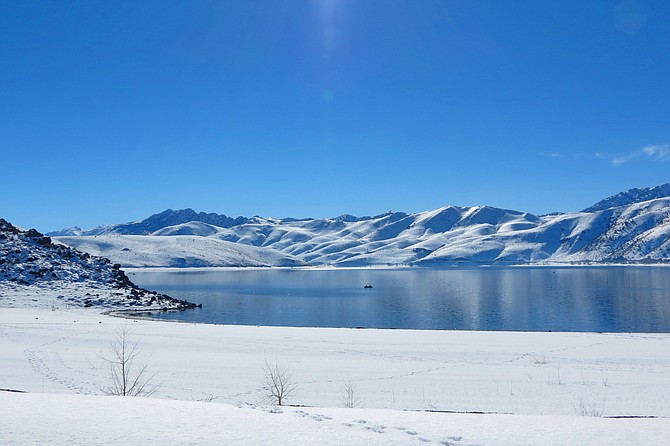 Topaz Lake was all silver and snowy last week.

Happy with the commission results

We are responding to the flurry of dispatches in the Feb. 4 R-C Letters column from establishment Republicans and disgruntled Democrats who singled us out for criticism regarding the county election results. As members of the successful County Commission candidates’ campaign team, we’re happy to correct the misapprehensions.

Our candidates ran on specific issues that were supported by a majority of the voters. Mark Gardner and Walt Nowosad have formed a majority with Commissioner Engels, whom they elected chairman for his leadership. Learning the job by doing may not earn Chairman Engels points with style critics, but he’s doing what’s important - keeping faith with the citizens of Douglas County. The three of them are now in the process of honoring their campaign promises.

The commission majority has a clear mandate to stop reckless residential overbuilding in Douglas County that the previous board majority waved through. Douglas County has seen large tracts of permeable agricultural land covered over with foundations and rooftops, impeding our aquifer recharge and threatening the supply and quality of our water. Our streets are being clogged by sharply increased numbers of car trips, and county services for new homeowners are being paid for by current taxpayers. It’s a fact that residential growth does not pay for itself.

The prior BOCC rammed through Redevelopment Agency number 2 that fenced off a large share of property taxes to build an event center that would benefit the wealthy casino corridor. They also waved through Park’s 2,500 housing development that included a dodgy swap of receiving areas from TRE to Minden. Our teams had no trouble gathering enough signatures to qualify referendums to put both of these issues to a vote of the people. The Park petition gained more than enough signatures to get the project on the ballot, but Park successfully sued the petitioners to deny the voters their say. What was Park afraid of? RDA2, however, did go to the voters, who decisively supported dissolving the redevelopment area.

To the Democrat writers, I’m sorry you’re not happy living in the most Republican county in Nevada, but you could have discovered that before settling down here. It’s not too late to escape this conservative tyranny and move to Clark County. To the Republican sore losers, we trust the commission majority will ignore your comments and criticisms and proceed to deliver the good governance the people of Douglas County demand.

It is a shame that the chair of the county commissioners feels the need to remove any reference to agrihoods from the Douglas County website. Agrihoods will help retain the rural feel of our county while contributing to the county’s economy and housing. The Record Courier reports that at least 70 percent of ranchers and farmers in our valley are not running their operations at a profit and that their children have no intention of continuing the work the land. No one should be forced to run a business at a loss and then not be able to sell the business.

That seems like what Commissioner Engels wants since he doesn’t seem to want to allow development here in Douglas County. Agrihoods are a great alternative for ranchers/farmers to be able to sell their property and not have it end up with solid housing tracts. They are a win-win solution to help retain rural atmosphere and still keep the economy going.

Engels, please open up your heart and mind and look at the big picture rather than your own egocentric vision.

As one of the supposed culprits Tom Zogorski attacks in his recent letter to the editor (Feb. 4, 2021 R-C.), I feel compelled to respond. Mr. Zogorski displays zeal, but as far as providing any true basis on which to evaluate the new commissioners, he’s short on good arguments and long on baseless, sore-loser accusations.

Of course, Zogorski’s mission (most likely on behalf of the developer and casino-loving “establishment” that includes ex-Commissioner Walsh) was to take no prisoners, so he couldn’t let logic get in the way. Or reality. Do his buddies, those developers and casinos, contribute “so much” to our county that we should revere them as Zogorski suggests? Guess it depends on how “so much” is measured.

If it means have the developers been given a green light on every cockamamie development they want to cram onto parcels just about anywhere and particularly those zoned for agriculture, and in exchange for this privilege do they contribute unbearable traffic congestion and put the county behind in addressing its infrastructure since development does not pay for itself? Then, yep.

And if it means do the casinos contribute a “whopping” 3-4% of the entire money collected in tax revenue for the whole county but also contribute a troubling number of calls for services by our deputies and social services? Then yep, again.

Moreover, that building permit moratorium Zogorski throws out as if it were tantamount to shutting down all economic activity is, in actuality, a much-needed step in establishing exactly what the water situation is and creating a plan to improve traffic flow. Those new commissioners ran on “keeping us rural,” and that message generated votes because the former Board of County Commissioners catered to developers. For proof, just consider how many developments got turned down by Walsh, Barry Penzel, and Wes Rice in the last four years: zip, zero, nada.

Oh, and if establishing a Redevelopment Area that would siphon off a huge chunk of new revenue ($116 million) from the county into a slush fund that could only be spent on dolling up the casino corridor isn’t doing the casinos’ bidding, then what is? (Go ahead. Guess which three commissioners were all for this travesty? Yep. Walsh, Penzel, and Rice).

Lastly, I will simply point out that also thanks to Walsh, Penzel, and Rice, Douglas County entered into the worst development agreement I’ve ever seen (and I prepared dozens of them when I worked in a real estate law office). The purported “benefit” to the taxpayers of that terrible agreement — Muller Parkway — hasn’t a ghost of a chance of relieving any traffic, but rather will facilitate excessive development that will add to the problem (and, despite anyone saying so, Muller was never planned to include trucks, and it won’t).

I would like to commend Joan Costa for her really excellent letter of Feb. 4.

It would require the licensing and registration of all firearms and ammunition. “It would increase the federal government’s ability to monitor gun owners’ purchase and location of their firearms… and adds that the firearm owner must tell the government “where the firearm is or will be stored.” To obtain a license, individuals must also complete “at least 24 hours of training.” – Ryan Saaveda, The Daily Wire.

The registry information collected would be provided to all federal, state, and local enforcement agencies and to all branches of the U.S. military.

A background check prior to purchasing a firearm would include a “psychological evaluation,” which could also extend to other family members who reside with the person seeking ownership of a firearm.

Thus, the right to purchase a gun would be in the hands of a psychotherapist who may consider one’s political views a form of mental psychosis or depression from the COVID-19 mandates as reasons to deny a firearm purchase.

The bill also bans ammunition that is .50 caliber and larger, and limits magazines to 10 rounds or less. This could possibly make felons out of law-abiding citizens.

Additionally, it requires people to pay a yearly $800 insurance fee to the government. This makes our right of self-defense a purchasable commodity and limited to those that can afford the fee. Discrimination? Yes!

Gun registration is the government taking control of one’s firearms. Once they have this information, it is only a small step toward passing legislation to confiscate firearms and disarm law-abiding Americans completely. Progressive anarchists can continue to loot, burn, and destroy property while hapless citizens are left without the means to protect themselves, families, and property.

Such so-called “gun control” measures will do nothing to curb crime but only increase it. As the ole saying goes, “When guns are outlawed, only outlaws will have guns.” And that includes a tyrannical and overreaching government.

The inherent right to keep and bear arms is not some cheap commodity that can be bought and sold at the whims of government authoritarians. It is an indisputable right given to us by our Creator for our protection. It is guaranteed to each individual, regardless of political party, forever!

Please contact your legislatures and tell them to oppose H.R. 127. And encourage your sheriff to stand with freedom.

Lastly, consider financial support to organizations that support the Constitution and defend your right to keep and bear arms, such as the Second Amendment Foundation and Gun Owners of America.

“If society is honest and historically accurate, the only question that has any relevance to the gun control debate is, “Do you trust those in government, now and forever in the future, to not take your life, liberty, or property through the force of government? If the answer is “no,” the gun debate is over.” – KrisAnne Hall

While Jim Hartman‘s columns have always given great insight especially on political issues I found the Feb. 4 commentary “Election truths and Need for reform” to be a contradiction.

By rightly noting the “need for reform” and admitting the legitimate evidence of “notoriously inaccurate voter rolls, massive numbers of undeliverable ballots re-mailed, and ballot harvesting as the greatest potential for fraud”), he actually validates President Trump‘s many lawsuits and claims ultimately representing me and 74 million others.

I am sorry but the words “undeniable truth, indisputable win, debunked, denied, and rejected” etc. all dissolve therefore as conclusive “Election truths.” The swamp has regrouped in high places, and yes, “refuted and declined to accept the evidence.” I sincerely hope you Mr. Hartman haven’t fallen in. Nevertheless thank you for giving President Trump the credit he was due for four years.

Thank you for help with snow

I got stuck in deep snow at the mailbox, but I finally got myself out. I went home and got a snow shovel and started shoveling around the boxes.

Chris Mcrae (the tree contractor) saw me and went home and got his backhoe and plowed the whole area. Thank you again to a fine gentleman.

Wow – has anybody else noticed? Our T.V. picture quality recently has had a great

improvement. When we first came here, about 30 years ago, cable T.V. quality was not good,just being here made up for that but we never enjoyed the poor picture quality.

Some time ago we splurged on a larger T.V., but picture quality was still disappointing. Changedfrom cable to satellite service, but still poor.

Now, due to the Covid-19 infection problem, not going out as much and watching more T.V.,suddenly our T.V. pictures improved dramatically, yes, at last. As good as advertised.

At last we enjoy is excellent picture quality! Makes staying at home far more pleasant. With no change in our satellite system or antenna set up.