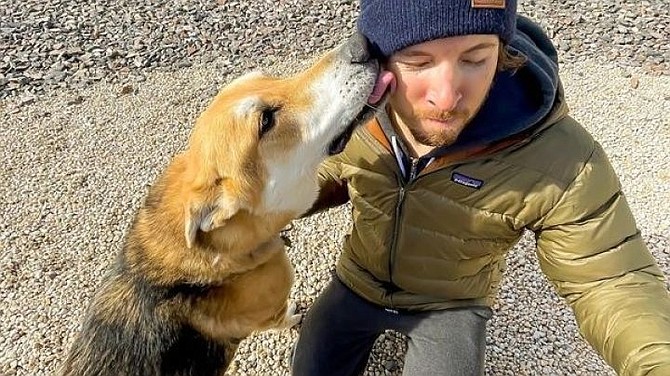 Tahoe resident Kyle Johnston gets a kiss from his pooch. Johnston survived an avalanche on Feb. 12 near Blue Lakes in Alpine County.

A Lake Tahoe resident experienced something in the backcountry that not many live through.

On Feb. 12, to start of Presidents Day weekend, Kyle Johnston experienced one of nature’s paramount winter intensities, an avalanche that not only swept him roughly 200 yards from where he fell off a 100 foot cliff, but also buried him for 5 minutes.

The experience has left him with absolute appreciation and gratitude.

“I don’t feel as bad as doctors say I should,” Johnston said. “I am doing well with all things considered — It feels nice to be home and out of the hospital.”

Johnston grew up skiing in Michigan where he lived with his family. He eventually moved to South Lake Tahoe with his cousin, Josh Daiek in 2004.

Daiek was skiing with Johnston the day of the avalanche.

The two were in the backcountry near Blue Lakes. They kept heading south and ended up a bit south of “The Nipple” where the avalanche was triggered.

The two had done a handful of runs and while the snow was good, they noticed some indicators that could involve too many risks so they decided to change plans to a safer area.

Daiek dropped in first, and then Johnston. After a few turns, they were faced with a mandatory cliff section and both were planning to ski through when the hillside slab crumbled.

Johnston navigate out of the slide, but it forced him to head toward cliffs and rocks.

In a split second decision to avoid the area, he went off a blind cliff with several rocks below him.

“I do recall the thought of ‘oh no, this is really big,’” he said. “Thankfully I remember everything until I hit the ground and lost consciousness.”

The snow from the avalanche continued over the cliff that Johnston had just went off.

The avalanche dragged Johnston about 200 yards from where he landed.

“It’s all kind of a blur,” he said. “The next thing I remember was my cousin digging me out.”

After the avalanche, the only thing sticking out of the snow was Johnston’s hand, and Daiek was able to see it among avalanche debris.

Johnston said he remembers feeling liquid in his lungs and hearing his cousin on the phone with emergency services.

“It was so surreal, I don’t even know how to put it into words,” he said. “In some aspects, it doesn’t even seem real.”

Within 15 minutes, the Care Flight helicopter arrived and landed.

“It was an intense feeling of relief,” he said. “I am really fortunate that the helicopter was able to land in that type of typography.”

Medics made their way through avalanche debris and got him into the helicopter where he was flown straight to the intensive care unit at Renown Regional Medical Center in Reno.

Johnston spent 11 days in the hospital and had two surgeries. He suffered from a punctured right lung and bruising on both, a concussion, broken spinal segments C7, T1,T2, T3, and several ribs.

He also has a small brain bleed, which the neurosurgeon said wasn’t of huge concern. Fortunately Johnston was wearing a helmet. Johnston was released from the hospital on Feb. 23.

However, Johnston didn’t want the link included and wanted instead to express his gratitude for the community.

“It could have ended my time on this earth, it seems like a distant dream. I am thankful I am alive and thankful for my cousin, family, careflight and everyone involved. Words can’t express my gratitude for my cousin saving my life, my girlfriend being by my side and my community,” he said. “It is pretty emotional and it brought me to tears to think about how many people have reached out to me in this town both those I know and those who I don’t know. I want to make sure this town knows how thankful I am for everything. It’s been moving to have the support of this town. I am looking forward to getting back out there.”

Steve Reyaud, forecaster at Sierra Avalanche Center, said that this specific avalanche was part of the Presidents Day weekend storm and wind slab that formed the recent storm that hit the area.

“It wasn’t a large storm but the snow did not bond well with the existing slab,” he said.

This specific avalanche cycle lasted for about four days and within those days, there were 40 different avalanches reported to SAC.

“It was an interesting avalanche event,” he said.

While forecasters at SAC usually investigate most of the reported avalanches, they were unable to investigate this one due to time and it’s remote location.

While there have been several deadly avalanches in Colorado and Utah this year, the entire western United States has had a similar snowpack this winter with early snow in November and a dry spell following, with the exception of Canada and Alaska.

“In general, we’ve had the same layering,” he said.

However, in places like Wyoming, those dangerous layers are still active whereas in the Sierra, those layers have consolidated.

Reynaud recommends avoidance or skiing at a lower angle terrain during those times and highly encourages anyone one going into the backcountry to get avalanche specific education.

“Avalanches are very dynamic and snowpack is ever changing,” he said.