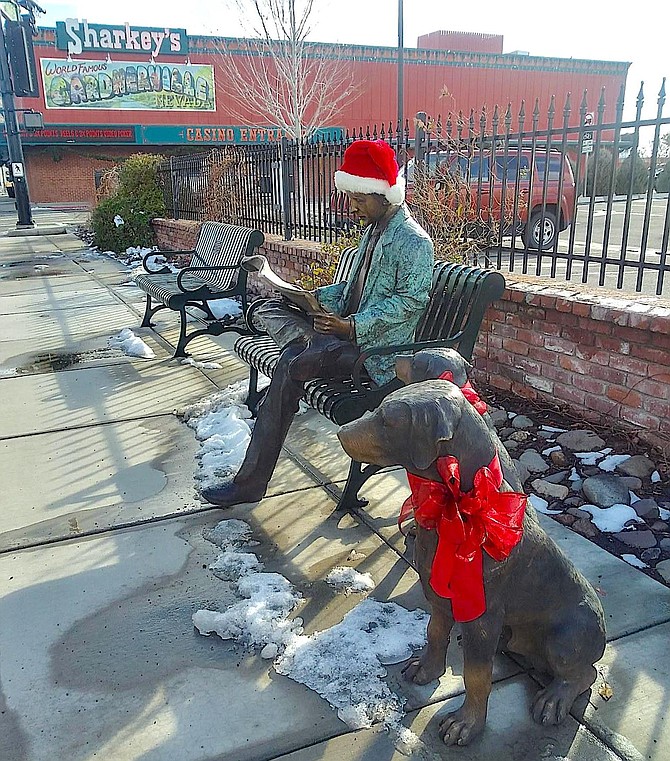 The statue of a man reading The Record-Courier (according to us, at least) dons seasonal attire for his first Christmas in Gardnerville.
Photo by Sarah Drinkwine.

Genoa, Nev. — The Town of Minden is unwrapping a great big Christmas present to Carson Valley in the form of the Seeman Ranch Park. It might be frosty on that job site, but at least the water table’s low, Town Manager JD Frisby points out.

County commissioners approved the $1.8 million Martin Slough Trail project on Thursday, capping more than a decade of work to join the towns of Gardnerville and Minden along the waterway along their northern sides.

Wreaths Across America observations are 9 a.m. Saturday at Garden Cemetery in Gardnerville and Eastside Memorial Park in Minden. The Carson Valley Museum & Cultural Center is hosting a Gallery of Trees get-together 11 a.m. to 1 p.m. Saturday.

On the music front, the Carson Valley Pops Orchestra is rehearsing for Saturday’s sold-out Winter Concert at 7 tonight in the CVIC Hall. While not the main event, they hope those who want a taste show up. Admission is free.

California closed Monitor, Ebbetts, Sonora and Tioga passes for the season on Thursday. They were all closed for the storm back at the beginning of the week.

With the exception of around a mile of Highway 28 in one small corner, there aren’t any road controls listed in Douglas County this morning for the first time since Monday.

There’s fog down along the river this morning, which might leave a little ice on the road, seeing that it’s 12 degrees at Minden-Tahoe Airport. The fog should clear by 8 a.m. with otherwise sunny skies and calm winds, and a high of around 38 degrees.