Little bit of snow guides summer out the door 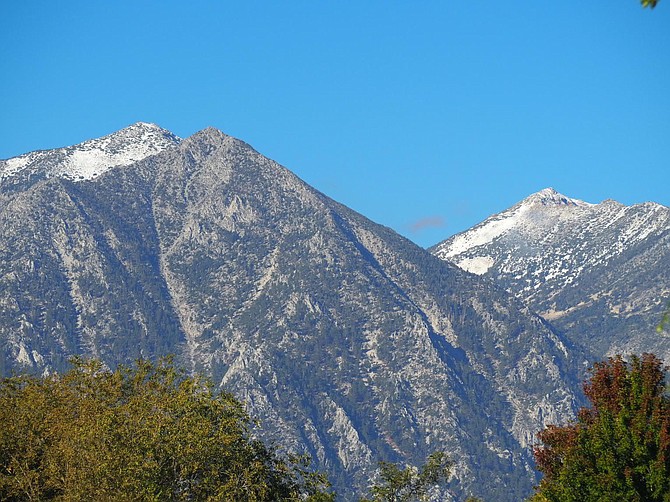 Gardnerville resident Dave Thomas took this photo of a dusting of snow on Jobs Peak on Thursday morning.

Snow on Jobs Peak showed summer the door on Wednesday.

Not quite a half-inch of snow appeared on the Heavenly snow stake near Tamarack Lodge.

A gauge just north of Genoa recorded .4 inches of precipitation, while one on Highway 88 between Mottsville and Centerville recorded .3 inches. Precipitation generally decreased going east, with Minden-Tahoe Airport only recording .14 inches and Minden with .09, which is below the average .13 for this time of the year.

Ruhenstroth received .35 inches and Fish Springs recorded .49, according to the National Weather Service in Reno. Fog clung to the river on Thursday morning, but burned off quickly.

With only a week left in the water year and the beginning of autumn on Thursday, the forecast shows sunny skies, with highs climbing back into the 80s next week. Another night of chilly temperatures are expected overnight on Thursday.

“Between 4-8 hours of sub-freezing temperatures in the cooler valleys will be enough to harm sensitive vegetation and burst irrigation pipes,” forecasters said on Wednesday. “While not as cold as tonight, freezing temperatures are once again expected Thursday night. Take necessary steps to mitigate common issues that typically arise with the first hard freeze of the season.”

Motorists in the Sierra may encounter freezing fog in the Sierra valleys from South Lake Tahoe north tonight and on Thursday morning, forecasters said.

“Reductions in visibility and slick roads and bridges are possible,” forecasters said. “Allow extra time if traveling through these areas during the early morning hours.”