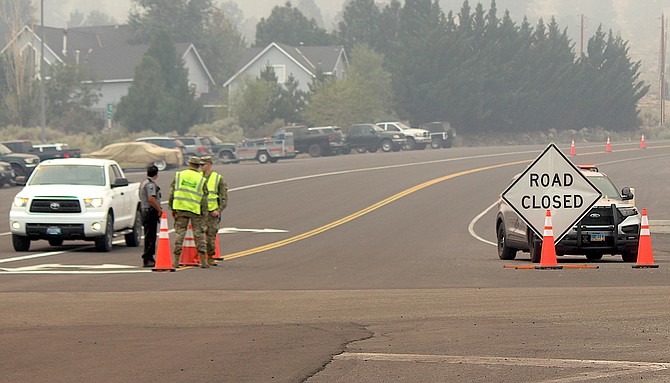 National Guardsmen and a Nevada Highway Patrol trooper confer at the base of Kingsbury Grade on Wednesday afternoon. State and federal resources are coming to bear on the Caldor Fire.
Photo by Kurt Hildebrand.

Genoa, Nev. — The containment date is back down to Sept. 13 this morning on the Caldor Fire, which may be a sign fire official have increased confidence in the fight, or that someone hit the wrong button. In either case, that’s something I’m happy to be wrong about. Firefighters made some progress on the fire last night increasing containment to 25 percent. We’ll see what the coming weeks bring.

Satellite mapping from 4 a.m. this morning shows the Caldor Fire burning up the sides of Trimmer Peak west of Freel Peak. The fire has crept to within 3 miles of the state line, but it so far remains in California. This morning’s situation report indicates that despite the red flag warning the fire grew around 10,627 acres to 210,259. There are 4,451 firefighters working the blaze, the most of any fire in the reports.

The Heavenly Ski Area fire camera is showing active flames this morning, so the fire is still burning away just the other side of the Carson Range. We made it through the red flag warning on Wednesday without the fire crossing the state line and cooler temperatures this morning may help, but with active flames there’s no telling what’s next for this blaze.

An evacuation warning remains in effect along Foothill Road this morning. Now’s the time for residents to pack up what they need and make preparations should the evacuation become mandatory. There are a lot of firefighters working to stop this blaze, but we need to give them room to maneuver.

The smoke plume continues to bisect the Valley diagonally with Minden and Gardnerville the pivot. Northwest in Genoa the air quality was 279 at 5 a.m. this morning, while in the Gardnerville Ranchos at the same time it was 101.

Expect more haze and smoke today under sunny skies with a high of 83 degrees in Minden. The wind will pick up out of the west to 5-10 mph in the afternoon, gusting to 20 mph. It’s supposed to creep back into the 90s this weekend, but that will depend in part on the smoke.