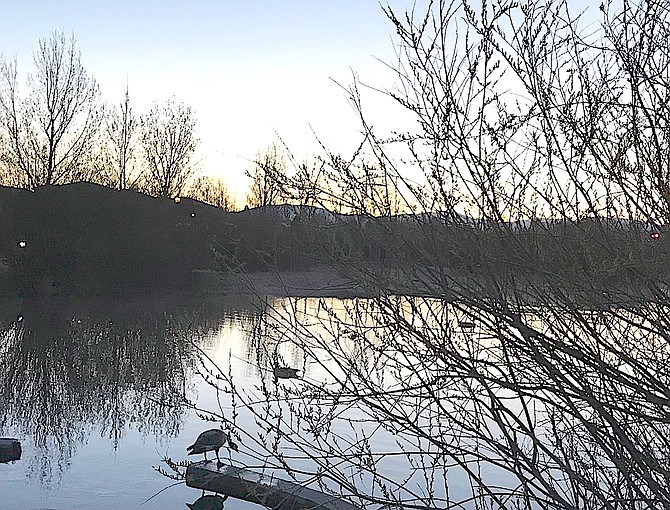 Geese float at Jake's Wetlands in Minden on Thursday in this photo taken by Ken Bezich.

Genoa, Nev. — Today is the deadline for bills at the Legislature to be passed out of the house where they originate. Any bills that don’t, are allegedly dead, unless they’re money bills or someone can resurrect them or some other arcane process is used to drop them into another bill.

Sonora Pass isn’t open yet, but don’t be surprised if there’s an early opening for both it and Ebbett’s Pass this year due to the drought. The earliest Sonora pass has opened in the last decade, that I can find, was April 17, 2015.

Cemetery Lane will be out of commission for the next month as Gardnerville reconstructs the road. The town suggests taking Center Town Drive or Church Street as detours to Douglas Avenue.

Douglas had 11 new coronavirus cases and nine recoveries over the weekend and Monday, according to Douglas County Emergency Management. The county is at 95 active cases. There have been 2,628 recoveries and 35 deaths since the pandemic began.

There may be some weather waiting in the wings starting Sunday, but that’s the distant future for a Sierra forecast. Today expect sunny skies and a high of 71 degrees, with the wind 15-20 mph out of the west, gusting to 30 mph. We could see some showers later tonight with a possibility of snow over the passes.