What about Big Foot? 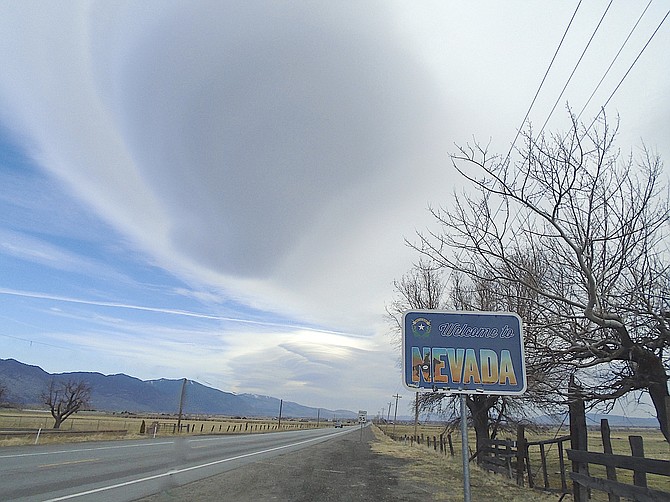 The Welcome to Nevada sign along Highway 88. Photo by Lisa Gavon

As he lumbered down the fire scarred mountainside, she could see that whatever the creature was, it was way bigger than her Uncle Alvin, who stood about 6 foot 3. It moved with an ease and comfortableness, and was strikingly beautiful. Its body was covered with long brown fur that shined in the warm light of the sun.

Yolanda was 11 years old and out on a Sunday drive with her family. The five of them had stopped to get out and look for a place to have a picnic lunch. She and her father had returned first to their car, and were sitting inside when they saw him. They watched as what she realized could only be Big Foot passed in front of their vehicle and moved on down the slope.

He did not have a face like a gorilla. Yolanda saw Big Foot before the Star Wars movies came out, but says the closest thing she has ever seen to him was the Chewbacca character. For her, she did not feel any fear at all, but for her father it was a different story. It unnerved him. He kept insisting it had to be a bear, but Yolanda said, “Dad, that was not a bear!”

When the rest of the family came back to the car, her father turned around and drove back the way they came until he found the nearest roadside bar. Yolanda said this was not something her father had ever done before, but he went in and got very drunk. They all ate their picnic in the car, waiting for her father. Her mother drove home.

Even as the years passed, her father absolutely refused to talk about their experience, but it did not upset Yolanda. She has always been a person who believes, “there are more things in heaven and earth” than we can possibly comprehend or understand. The completely fur-covered creature looked very human to her. The face and head did not have as much fur as the rest of him. He had not run from them, nor had he seemed in the least reactive to the presence of humans.

This occurred north of Douglas County, but another friend had an experience inside the borders. First his nearby neighbor saw what she described as a “half-man, half-bear” one night when she was up late cleaning the house. She had never even heard any of the folk legends about Sasquatch before this, and screamed when she saw him standing outside her window. The creature simply left.

It was a few years later when my friend heard “the noises”. It was late one night and he couldn’t sleep. Stepping outside in the deep darkness of the moonless night, he heard two sounds that went straight through him. He had been aware of other creatures before: the slow trudge of a bear or the call of the local owls, but this was different. He describes the first sound as being somewhat like a baseball being hit with a bat. Following that was a vocalization from an entirely different direction that was a more of “Whap!” sound, and distinctly primal. He wanted to stay outside and turn on the lights to see what was there, but his mind was filled with the remembrance of his neighbor’s encounter. “I felt inferior to whatever was making that noise,” he reported, “and went inside and locked the door.” It is always wise to trust your intuition in cases like this.

In the ’70s there were reported sightings on Kingsbury Grade. Three local boys took advantage of the commotion around this. The road was not yet complete and there was one section that was very narrow and curvy. There was no place a car could pull over or park for quite a long distance. You couldn’t stop, but just had to keep going. Two of the boys would watch from the hill across while one of them, dressed in the “Big Foot” costume would wait for lights coming up to the bend and go out next to the roadway just long enough for the driver to get a “glimpse”.

Two of the boys felt the other one was rushing up and back too quickly. They thought there should be time for the hapless traveler to really believe he had seen Big Foot. The boy acquiesced, lingering quite awhile. It turned out to be a police car, and all the boys scrambled into hiding. The policeman did indeed park and take the long walk back to the curve. Shining his light into the tangle of bushes, he shouted “Come on out of there Gorilla!” But the boys made no sound or movement, and eventually he left.

After this, one of the boys used to put on the suit and drive around in his vintage corvette, and then the “sightings” became both comical and commonplace.

Northeast and east, there is one family that has discovered footprints in two separate locations. “There is no other possible explanation except that they belong to Big Foot” they said. They were also fortunate enough to capture a late night image on an outdoor motion-activated camera. “Big Foot is real!” was the comment of the youngest member of the clan. She feels she has seen enough proof.

These creatures that stand “larger than life” are variously known as Sasquatch, Yeti, Abominable Snowmen, but most commonly as Big Foot.

The stories included here are ones I have heard from people I know. I obviously have no way to verify all the facts, but like Yolanda (not her real name) I think there is much that is magical, multi-layered, and unknown on this strange and wonderful planet. Tales of giants abound in every culture around the globe and have captured our imaginations in folklore, dreams, and fairytales. These are the legends and myths that allow us to ponder all the mysteries and unexplained phenomena that just might exist right in our own backyard.