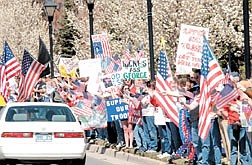 A huge crowd rallied the troops Saturday in front of the Legislative building Saturday. People waved flags, held pictures of loved ones in the military and were honked at by cars passing by. photo by Rick Gunn