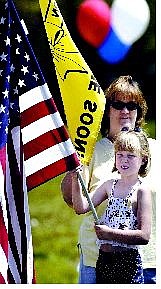 Cathleen Allison/Nevada Appeal Jody Ostrander, 7, and her mom Mary Jane, participate in the pro-America rally on the steps of the Legislature on Monday.