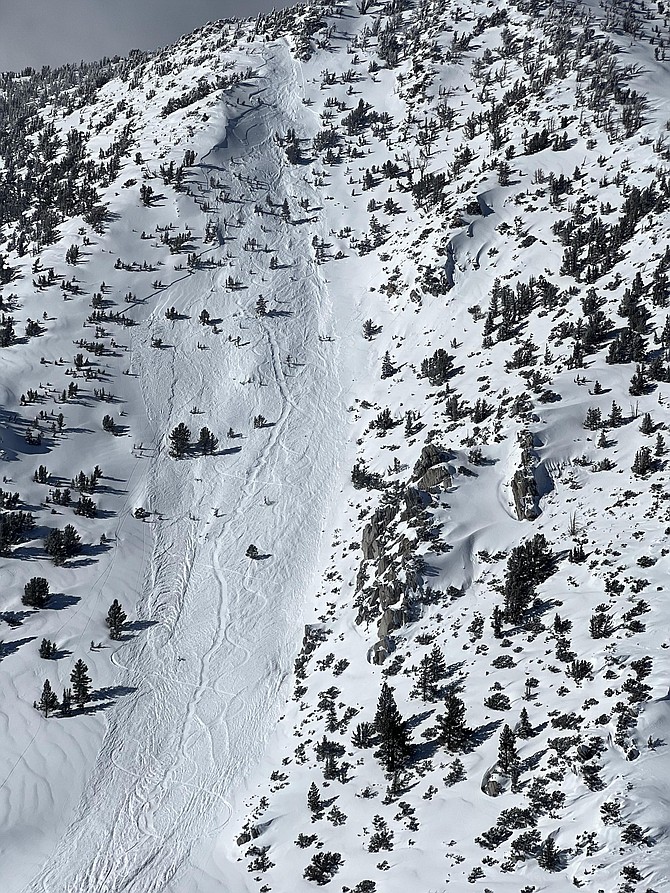 A photo of the avalanche that occurred on the back side of Heavenly southwest of Monument Peak on Jan. 19 posted to the Sierra Avalanche Center website. Two skiers were injured in the slide.

A chain reaction set off an avalanche that resulted in two skiers being caught up in an avalanche that occurred 1 p.m. Jan. 19 southwest of Monument Peak, according to a report issued by the Sierra Avalanche Center.

According to the center, which tracks avalanches and observations of possible dangerous spots, three skiers were involved in the incident.

“First skier triggered avalanche below others which subsequently triggered two more above the other skiers involved,” according to the center. “Two of the three skiers were collected in the avalanche and suffered major injuries. No burials reported. Avalanche ran the entire course of the terrain.”

The incident occurred on a 30-percent slope on a southeast facing slope in full sun with gusty winds.

El Dorado County Sheriff’s Office Sgt. Alexander Sorey said the two skiers entered an area known as Rattlesnake, located just outside the resort boundary near the power lines above High Meadows below Ridge Run and Sky Express on the California side of the resort which also extends into Nevada.

“We can confirm that an out-of-bounds avalanche occurred … beyond the ski area boundary,” said the resort in a statement. “There are two confirmed injuries of backcountry skiers who were in the area."

Sorey said the Sheriff’s Office organized a search and rescue response and then coordinated with Heavenly Ski Patrol, who sent four patrollers to assist.

Rescuers called on local air ambulance, Calstar, and Careflight from the North Shore to assist along with hoist capable CHP Air Operations.

Sorey said Calstar and Careflight landed near the victims and they were transported to Renown Regional Medical Center in Reno with moderate-to-major injuries.

Heavenly said in a statement that it performs avalanche mitigation within its boundaries and recommends if skiers or riders want to go beyond the boundaries, they should be prepared and leave through one of the gates provided.

“Within the ski area boundaries, Ski Patrol performs avalanche mitigation work and provides emergency response,” the statement said. “Given the large amount of terrain outside our boundaries, Patrol does not ordinarily provide avalanche mitigation or emergency response to those areas. However, in this instance, our Ski Patrol team did respond and worked alongside local search-and-rescue teams to assess the area and conduct necessary activity as the result of this out-of-bounds avalanche event.

“Guests who wish to access backcountry terrain from the resort are encouraged to do so through designated access points only, which often provide important warnings and may provide snow condition/avalanche danger information or the phone numbers for Sierra Avalanche Center or similar organizations,” the statement continued. “Guests leaving Heavenly Mountain Resort boundaries should be experienced and knowledgeable about backcountry travel, as well as prepared with the appropriate gear and safety equipment.”