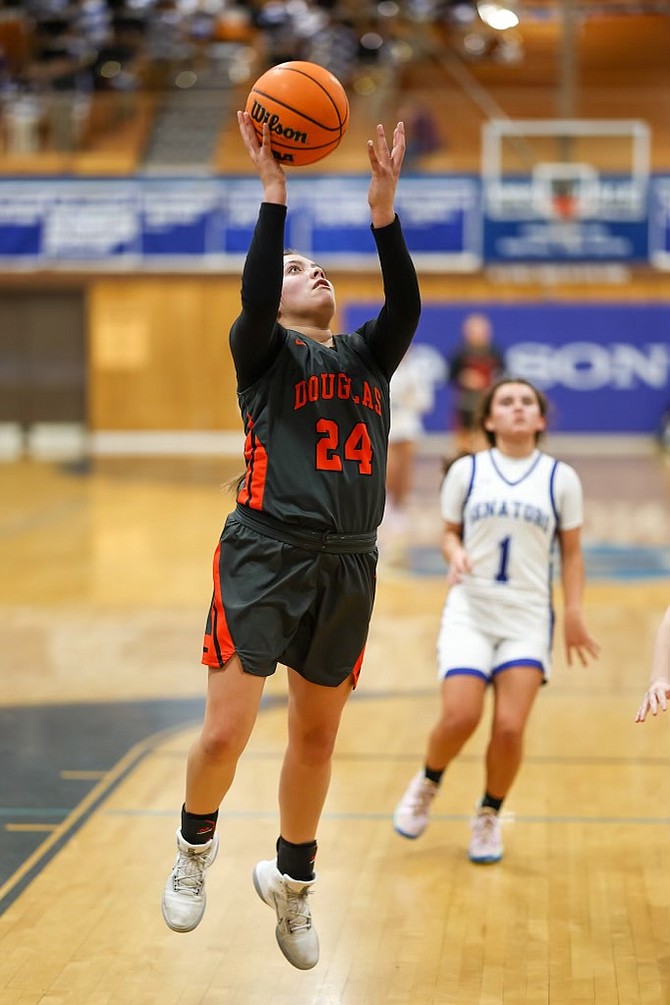 Douglas High's Zora Simpson drives for a layup for two of her game-high 17 points as the Tigers defeated Carson, 53-20, Friday night.
Photo by Ron Harpin.

Both Douglas High School basketball teams had little issue with Carson High Friday night, as both the girls and boys cruised to double-digit wins.

The first quarter powered both wins at Carson as the Tiger girls pulled away for 53-20 win.

The boys were no different, picking up a 60-37 victory.

The Tiger girls built an 8-0 lead early in the girls game behind buckets from Skylyn Rassmussen, Zora Simpson and Talia Tretton.

While the Tigers did a quality job at distributing the scoring, it was Simpson who was a force in the first half as she posted 14 of her 17 points in the opening two quarters.

The Tigers lead grew to 21-5 at the end of the first quarter, but Simpson opened the second quarter with a triple from the wing off an assist from Gabi Wallace.

After McKenzie Main drilled a triple, Simpson stepped into a 3-pointer from the top of the arc on Douglas’ next possession and nailed it.

Simpson’s triple gave Douglas a 32-7 lead before Simpson scored again off an assist and steal from Main.

“Her leadership, (she’s) Just stepping on the floor and leading by example. She’s not super vocal, but she leads by her play,” said Douglas High head coach Jason Carter of his guard, Zora Simpson.

While Simpson led the way in the scoring department, Douglas’ defense was dominant in holding Carson to just three points in the entirety of the second half.

A 36-17 lead at half ballooned to a 53-20 final as the Tigers held the Senators off the score sheet for the fourth quarter.

“The girls are really gelling,” said Carter. “They’re working hard and pushing each other. That’s really showing out on the floor. I thought we did a really good job in transition and defensively we moved very well.”

Aleeah Weaver had a handful of nice drives to the basket as she posted nine points for the Tigers.

Lauren Finnerty, who had 12 points in the loss, led Carson. 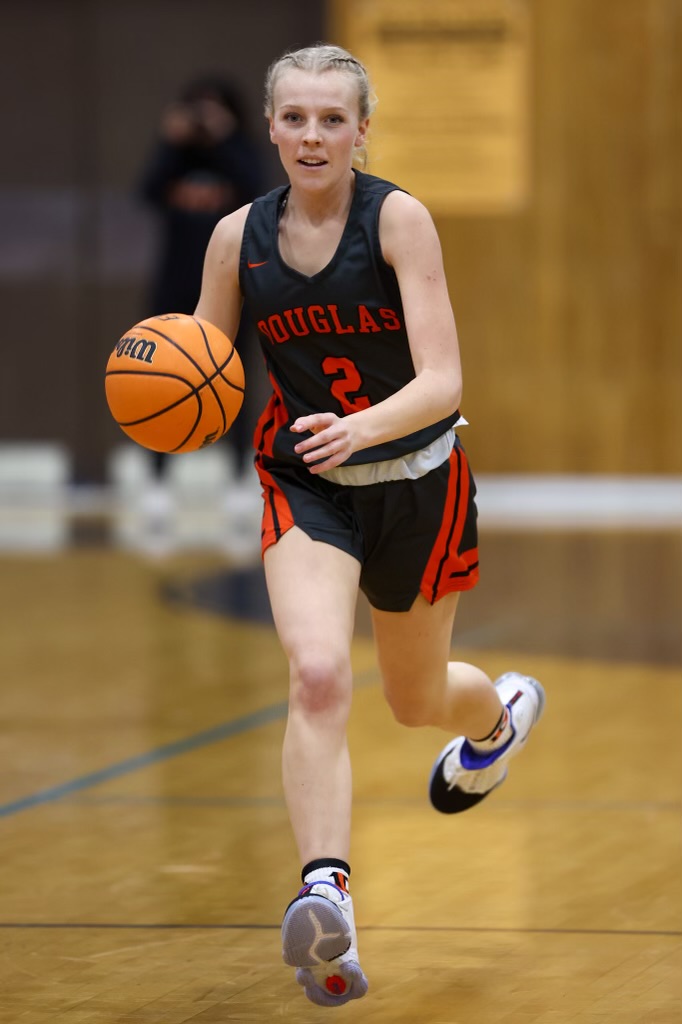 It was a repeat in the boys game as the Tigers also stormed out to an 8-0 lead behind the lights-out shooting of senior guard JC Reid.

Reid went 3-for-3 to open the game, knocking down two triples and giving Douglas a quick grasp of the first installment of The Rivalry this winter.

After Carson responded with a pair of buckets, Caden Thacker drove the lane with a silky eurostep providing a bucket and earning a free throw to give the Tigers an 11-4 edge.

Theo Reid hit Thacker for a triple on the Tigers’ next scoring possession, putting Douglas in front 14-4.

At half, the Tigers led 33-13 with JC Reid outscoring the entire Senator lineup, accounting for 14 points in the opening 16 minutes.

Reid finishes the game with a personal season-high total of 22 points as well as two rebounds, two assists and three steals.

“He said he loves to shoot in this gym. That’s just how it is,” said Douglas head coach Corey Thacker. “He’s worked at it and he deserves it.”

Thacker ended his night with 16 points and five rebounds.

The 20-point halftime deficit only swelled in the third quarter as Reid hit another triple to make it 49-21 after three quarter.

Jack Tolbert capped the third quarter with a monstrous block to keep the Senators from scoring any points in the remaining seconds.

“The biggest thing is having intensity to start and maintaining it,” said Thacker. “We need to keep that intensity the entire time and that’s what we want.”

For Carson, no one finished the evening in double-digits as far as points, but they were able to find some building points in the fourth quarter.

Decarlo Quintana led the Senators with nine points while Parker Story and Michael Hughes had eight and seven points, respectively.

“That (start) is on me,” said Carson head coach Ty Golden. “I have to have our guys ready. It was a couple of turnovers and transition baskets. Against a team like that, you have to take care of the ball.”

UP NEXT: Both Douglas teams will travel out to Reno for their second league tilt with the Huskies Tuesday. Carson will host Bishop Manogue Tuesday at Morse Burley Gymnasium. 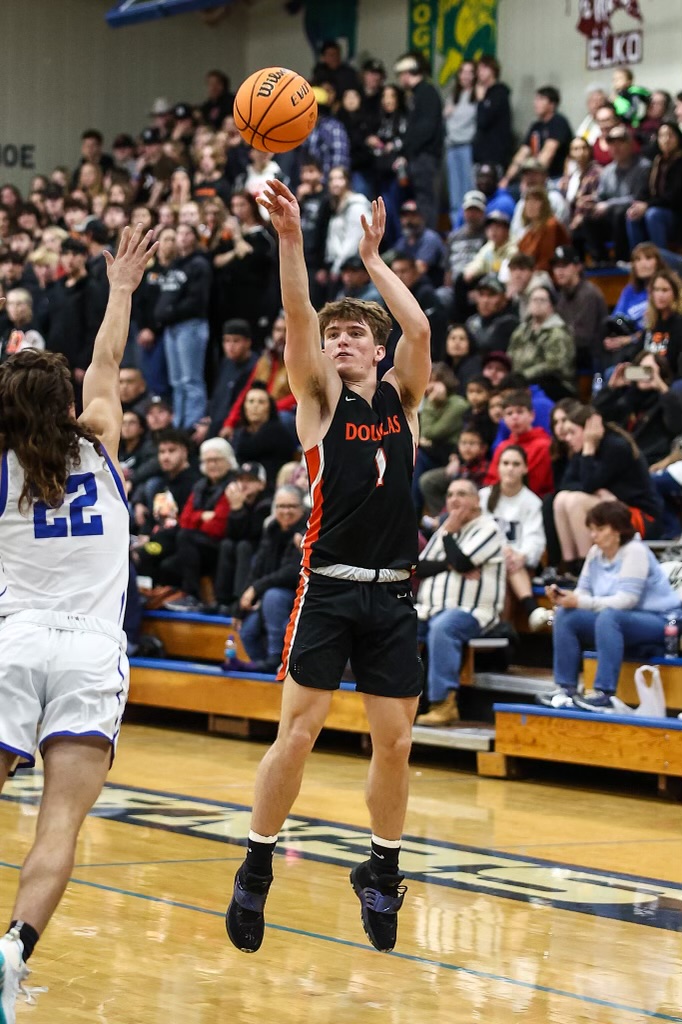 (JC Reid knocks down one of his six 3-pointers en route to a season-high 22 points as Douglas boys basketball bested Carson, 60-37. Reid had 14 points at the half and scored the first eight points for the Tigers in the win. / Ron Harpin)