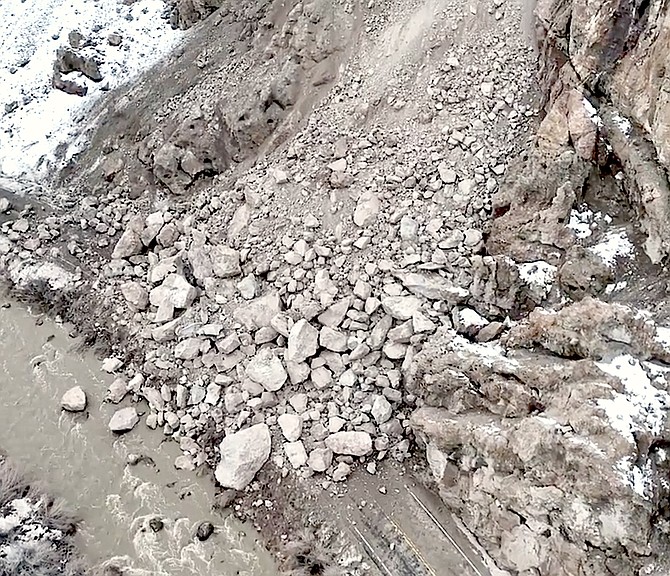 A Yerington Mason Valley Fire District drone captured this image of the slide across Wilson Canyon on Wednesday. The road between Smith and Mason valleys is closed.

While California transportation crews have made progress reopening Highway 395, it remains closed between Mono Lake and Bridgeport this morning.

The highway reopened between Mammoth Lakes to the intersection with Highway 167 just north of the lake on Wednesday evening.

In Nevada, a rockslide will keep Highway 208 between Smith and Mason valleys closed indefinitely while the Nevada Department of Transportation works to stabilize the slope and clear the road.

Fortunately, the slide stopped short of damming the Walker River through Wilson Canyon, which would have resulted in potential upstream flooding and complicated workers efforts to clear the highway.

CalTrans’ https://roads.dot.ca.gov is indicating Highway 88 is open from Kirkwood to Woodfords. No traffic restrictions are reported for either Highway 50 or Interstate 80 this morning.

As of lunchtime Wednesday, Kingsbury Grade and Interstate 80 have reopened.

Traffic is still being held at Echo Summit and Highway 88 is closed.

The closure of all three routes through the mountains on Tuesday night led to a delay in customers receiving The Record-Courier.

State officials say a rockslide that closed Highway 208 between Smith and Mason valleys will be closed for an indeterminant amount of time.

"Likely caused by recent heavy precipitation, a landslide and rockfall fell across roughly 400 feet of roadway between mileposts 14 and 15 at approximately 6 p.m. Jan. 10," sate officials said. As of this time, there are no immediate indications of injuries as part of the landslide. The roadway is closed to through traffic between Hudson Aurora Road and State Route 339, a section of road running through the Wilson Canyon between Smith Valley and Yerington. Approximately 1,800 drivers travel through the area each day."

A winter storm is making getting around Western Nevada increasingly treacherous as all three routes through the passes are shut down, along with Kingsbury Grade and Highway 208 through Wilson Canyon.

A fifth-wheeler jack-knifed about halfway up Kingsbury around 5 p.m., but slick conditions and a report of boulders on the roadway ensured it would not reopen as significant snow fell at the top of Daggett Summit.

A rockslide shut down Wilson Canyon where the Walker River passes from Smith to Mason valleys.

The California Department of Transportation is holding traffic over Echo Summit, according to nvroads.com

Highway 395 from Bridgeport south due to significant heavy snow, wind, and whiteout conditions between Gorge Road, 13 miles north of Bishop, and Bridgeport.

Closer to home, emergency personnel responded to a rollover at the bottom of Jake’s Hill on Highway 395.

Buckeye Road near the former Bently Biofuels station reopened around 5 p.m. after high water closed it on Monday night.

Water was still flowing over the road at 10 a.m. Tuesday.

The National Weather Service warned that wet roads may turn to ice overnight with an enhanced threat for slick conditions during the evening and Wednesday morning commutes.

Buckeye Road remained closed at 10 a.m. Tuesday after floodwaters not just overtopped it but streamed over into Minden’s maintenance yard.

The snowstorm dissuaded county commissioners from their meetings to appoint new board members both today and Wednesday.

Douglas County made some progress in opening roads, such as Centerville Lane west of the roundabout.

“Intermittent snow showers will continue to produce areas of near zero visibility and quick 1 to 2 inch accumulations across Western Nevada,” according to a special statement issued by the National Weather Service at 12:25 p.m. “Sneak peeks of blue skies may suddenly cloud over with periods of light to moderate snowfall through the early evening. The snow showers will also result in variable road conditions across the region, especially with cloudy conditions limiting sun exposure to warm roads or melt the snow. Wet roads may turn to ice overnight with an enhanced threat for slick conditions during the evening and Wednesday morning commutes.”

Chains or snow tires were required on most Western Nevada roadways as snow continued to fall through the morning. That included Highway 395 from Carson south to Topaz Lake and Highway 88 south to the Nevada state line.

The Nevada Highway Patrol reported motorist assists on Highway 50 near Glenbrook and Highway 395 in the Pine Nut Mountains.

At 10:43 a.m. an 18-wheeler was reported stuck on Highway 395 near Jake’s Hill after losing his chains. The big rig was blocking the highway.

Anyone successfully navigating Highway 88 to Hope Valley would find 88 is closed from Pickett’s Junction to Kirkwood.

Highway 395 was still closed south of Bridgeport almost to Bishop on Tuesday morning.

Highway 6 reopened at 2:50 a.m. today. The highway is the main detour around the closure on U.S. 395 for vehicles traveling to Bridgeport, Carson City, and Reno. State Route 168 E reopened this morning at 9:54 a.m. with R2 chain control restrictions in place.

The California Highway Patrol reported snow sticking at an inch an hour with several semis stuck near the Ag Station. At one point 30-40 trucks were reported to be stuck.