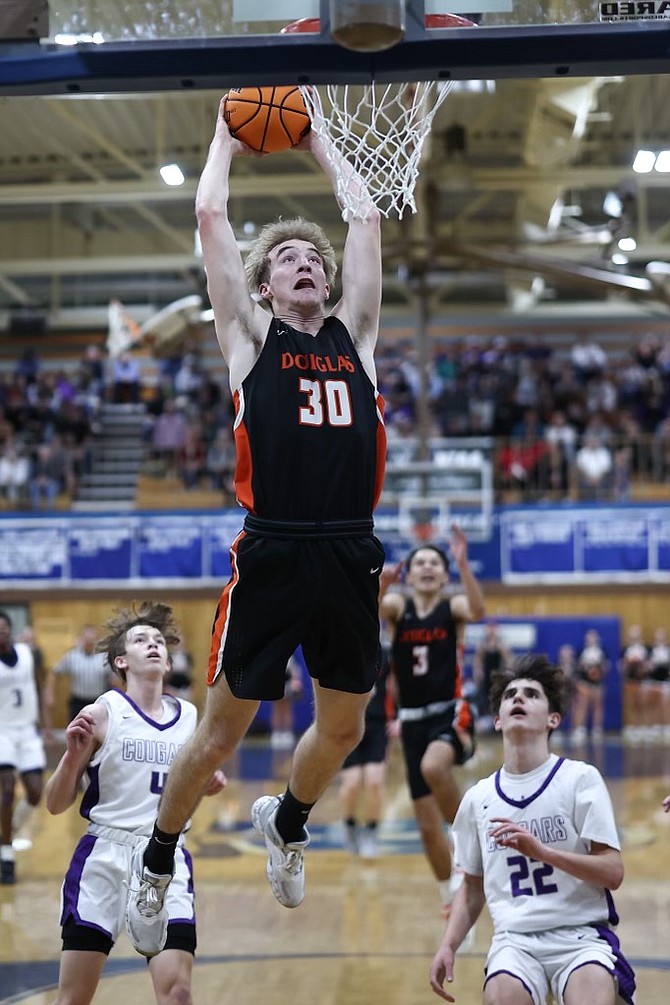 With 2022 winding to a close, I wanted to take a look back at the best moments from the prep sports year in our coverage area.

These are the 10 best moments of the year – in no particular order. Of course, some moments may not make it.

If you disagree feel free to email me at ceckl@nevadaappeal.com.

I would be remiss if I didn’t lead with the 2021-22 Douglas High School boys basketball team.

The Tigers were even back in the news recently after hanging their Class 5A regional championship banner, which they won 54-43 over Spanish Springs at Carson High School.

Douglas went 12-1 over its last 13 games of the year before falling to Liberty in the state semifinals at Lawlor Events Center.

The team started to have ‘that feel’ around it as the season progressed.

Not only that, they set records in the process as Douglas now holds the record for most 3-pointers made in a single game with 20 made in a win over Carson High.

Kasen Boggs won Player of the Year for the Tigers.

Chris Smalley was a force on the inside, earning first team all-region honors.

JC Reid was named to the second team all-region squad and Dakota Jones was an honorable mention at guard.

Theo Reid and Jack Tolbert were able to provide size around the glass and Connor Ward had some quality games for Douglas as well.

It marked the first time the Douglas High boys basketball team had qualified for state in 10 years.

Right alongside the Douglas boys, were the Tiger girls.

No, the Douglas High girls basketball team didn’t win a regional title, but did earn a spot in the final four and the state tournament after putting together an 18-9 overall record.

A mid-season coaching change didn’t slow them down either as juniors Addy Doerr and Camden Miller led the way in the scoring department.

Senior Riley Mello led the team in 3-pointers made and was capable of hitting big shots when the Tigers needed them.

Miller was a first team all-region selection while Doerr and Mello both earned second team honors.

Defensively, Douglas allowed the second fewest points in league contests and stifled teams throughout the season.

All in all, it was a nine-point win over Damonte Ranch that put the Tigers in the state tournament.

Even though they ended the season with back-to-back losses, Douglas was able to find positive takeaways in the season as a whole. 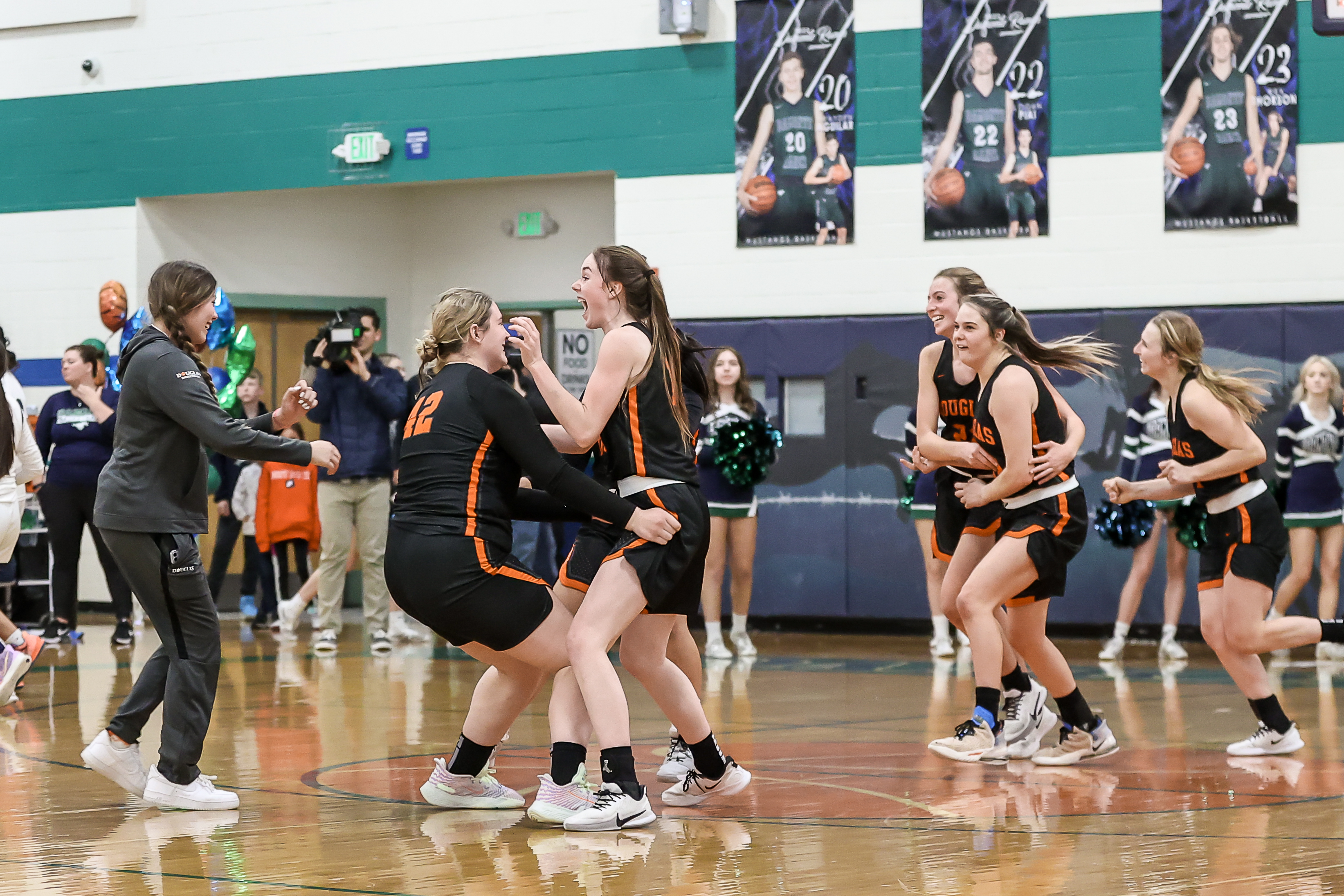 (Zora Simpson, far left, and Riley Mello (42) run to hug Addy Doerr in celebration after the Douglas High girls basketball team punched its ticket to the state tournament with a win over Damonte Ranch this February. / Ron Harpin)

The rest of Class 3A will be happy to see them leave next fall.

Better yet, the Tigers were able to celebrate their second state title on their home course where they spent countless hours improving their game.

Giana Zinke won the individual crown with a two-day score of 156 while the rest of the squad all finished inside of the top 13.

As a team, Douglas won by 89 stokes over two days.

Abby Miller was fourth for the Tigers while Abbigail Detsch and Madison Frisby were just off her pace.

“All we do in practice is putt and chip. I don’t think other teams really know how much work we put in on the range,” said Miller after winning the team crown.

Between the 2021 fall season and the 2022 title, Douglas High girls golf won 15 consecutive meets as a team.

It was another more recent moment, but the Sierra Lutheran High School volleyball team punching their ticket to the state tournament this fall is another top moment from 2022.

Though it occurred less than two months ago, it was the first time Sierra Lutheran volleyball had made the state tournament in 11 years.

“It’s the first time in 11 years that our program has qualified for state,” said senior captain Mikaela Christenson. “It’s an incredible feeling, seeing those last four years pay off.”

To make matters even more exciting, the Falcons were able to earn their spot in the state tournament with a win on their home floor.

Francesca Antonucci led the team in kills with 72 and was tied for a team-high in blocks with Cristenson (55).

Jade Chapman led the team in aces with 46 while junior Sam Steyn dug up 114 balls. 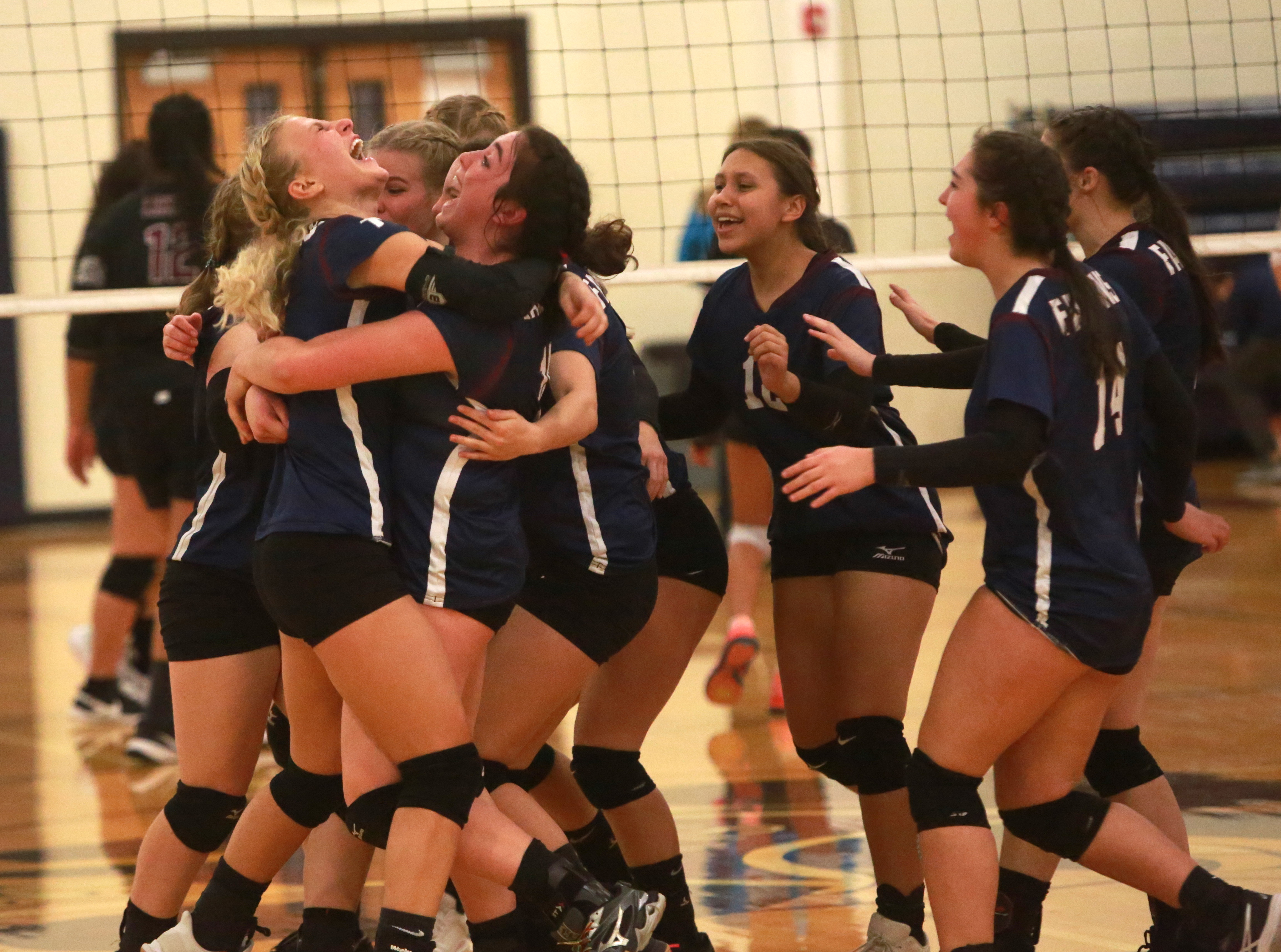 Jade Chapman, far left, and Francesca Antonucci, left, hug while the rest of the Sierra Lutheran volleyball team celebrates clinching a spot in the Class 1A state volleyball tournament in November. / Carter Eckl)

You can’t start any conversation about the success of Carson High athletics this fall without the Senator girls cross country team.

Composed of almost entirely freshmen, the Senators used consistency to their advantage in winning the Class 5A state title.

That came just a week after Carson won the regional title at Reed High.

The Senators had done the math before going down to Las Vegas and knew they had a decent shot to take home the state title.

But math and performance can be two different stories.

However, on November 8 they were not.

Hannah Budd was the first runner for Carson to cross the line, taking seventh place.

Vea Miner and Jinnie Ponczoch were right behind her in 11th and 13th, respectively.

It marked the first girls cross country for Carson High in 11 years.

The seniors for Carson High girls soccer only had 10 wins in their varsity career prior to the 2022 fall season.

This past fall, the Senators went 11-7-2 and made the postseason for the first time in six years, picking up a home playoff game against Galena.

Though the Grizzlies ended the Senators’ season earlier than they would have liked, Carson still had quite the year to look back on.

Gracie Walt earned Defensive Player of the Year and proved she was one of the top talents in Northern Nevada at any position.

Alondra Carrillo stepped into a role at goalkeeper and became a reliable piece in the back for the Senators.

Andrea Manriquez and Elayna Quintero both found themselves on he honorable mention all-region team as well following the season.

While neither team accomplished what they were hoping for in the postseason, you have to stop and look at both Carson High volleyball and Douglas High baseball from 2022.

The most significant change came up front where juniors Sarah Miller and Anna Turner both earned all-region honors.

Freshman Abby Franco didn’t get any postseason honors, but was a staple with 142 kills.

Setting for the three up front was senior Riley Kolsch, who was selected to the all-region team at the end of the season as an honorable mention.

Brittany Witter, who started as head coach for the 2021 season, earned Coach of the Year honors for the turnaround as well.

A win over nationally-ranked Reno High solidified a true contender for a regional title in Minden behind lights out performances from all over the diamond.

Gabe Natividad was named Defensive Player of the Year at shortstop.

James Hubbard earned a first team all-region selection as a pitcher where he boasted a 0.75 ERA over 56 innings of work.

Ryan Gonzalez picked up co-Coach of the Year honors as well.

Keegan Snooks found himself on the second team all-region squad as a sophomore pitcher while fellow sophomore Thomas Young also picked up a second-team nod in center field.

Many claimed it was the year of the Tiger after Douglas High softball won the Class 5A regional championship over Spanish Springs.

The Tigers made it within a game of winning the state title, too, before falling to Green Valley.

Talia Tretton was named Co-Player of the Year for Douglas while fellow hurler Mackenzie Willis was selected as the Class 5A Pitcher of the Year in the North.

Douglas was a perfect 11-0 in April as well.

Bri Williams and Zora Simpson were both honorable mention selections during the remarkable season.

Carson High’s Lukas Taggart capped his senior year with an individual regional crown in the spring of 2022.

Taggart, who now golfs at the Colorado School of Mines, won the regional title at Dayton Valley Golf Course down the final stretch of holes on the second day.

“I definitely think I did do better than yesterday,” said Taggart. “I just sort of hit the ball better and got the shots up and down that I needed too. I kept the ball in play and I didn’t miss as many short putts.”

At the state tournament, Taggart finished tied for third with a two-day score of 146, posting the best score of any golfer competing from Northern Nevada.

Dayton High School had both its baseball and volleyball teams make runs to the state tournament this year, but in two very different fashion.

The Dust Devil baseball squad was the sixth seed, heading into the Class 3A regional tournament where it knocked off the top two seeds in order to qualify for the regional final.

“In the beginning of the season, we were really struggling,” said senior Robbie Harrison. “It took a lot for us to kind of bring it together and play as a team to win a couple of games.”

Dayton finished out the season 15-19, but went 9-1 down the home stretch of the regular season and regional tournament before falling in the state tourney.

For Dust Devil volleyball, it wasn’t a Cinderella run as Dayton ran through the 3A North without much issue.

In early November, Dayton conquered the 3A North with a regional title behind key pieces such as seniors Riley Glynn and Hallie Peterson on the attack.

Kassandra Miller and Penny-Laine Vaelua were the teams’ leading passers while Ayisha Agee and Rachel Ply were the Dust Devils’ leading blockers.

Dayton ended the season with a 26-8 record and made it to the programs’ first state tournament appearance in six years.