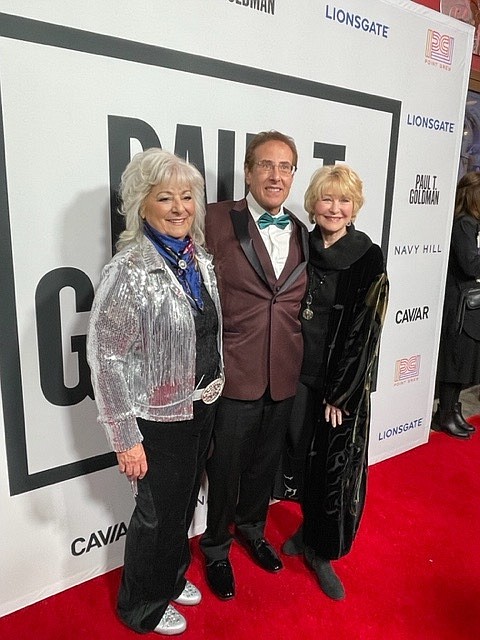 Terri Jay on the red carpet with Paul T. Goldman and Dee Wallace.
Mike Eisenstadt/Special to The R-C

The series follows the love life of an ordinary single father named, Paul T. Goldman, who ends up getting more than he bargained for. Soon after marrying, he begins to have questions about his new wife and turns to a psychic for a reading. What she reveals, sends him down a path he never could have imagined.

That psychic was Jay.

“He didn’t understand why she was so demanding about having her name on everything,” said Jay. “So, I did a reading and it turned out that she was nothing like what she said she was.”

Jay is a real-life intuitive life coach residing in Johnson Lane. She has helped thousands of clients for 32 years from animals with behavior problems to people with questions about their finances, relationships, careers, health or their own spiritual path.

“I have no ego in the process and just work to stay out of my own way and let the information come to me. That way I can receive the information that is specific to my clients, ” she said.

And that’s how Goldman and her met, she said.

“He was confused by her actions and requests,” she said. “It’s really about his transformation from this ‘whimp to warrior’ so to say.”

According to a press release about the series “Paul T. Goldman,” is the current project of Jason Woliner of “Borat Subsequent.” It said that Woliner became fascinated with the project after Golman tweeted him about his book and screenplay in 2012, which Goldman described as part documentary, part drama and part comedy, in other words a “docu-dramaedy.”

In the series Jay plays herself, but is also portrayed by Dee Wallace in the drama scenes. Other actors are Paul T. Goldman as himself, Melinda McGraw, Christopher Stanley, Dennis Haysbert, Josh Paris, Rosanna Arquette and Frank Grillo.

Jay said much of the series was filmed on her property in Minden and other parts of the Valley.

“It’s all been a hoot, interesting and fun,” said Jay. “I love what I do and I am honored to be included in this series as my readings for Paul were so bizarre.”

She said she hopes to eventually do a series of her own about being an intuitive life coach and her different encounters with clients.

“I think it would be interesting to show people what it is that I do,” she said. “Part of what I do is teach and inform and that’s what I enjoy most about it.”

A teaser of “Paul T. Goldman” is available on YouTube https://www.vulture.com/article/paul-t-goldman-peacock-trailer.html

The release date is Jan. 1 for the first three episodes and then a new episode will release once a week for a total of six episodes.