Gardnerville Maverik back to square one 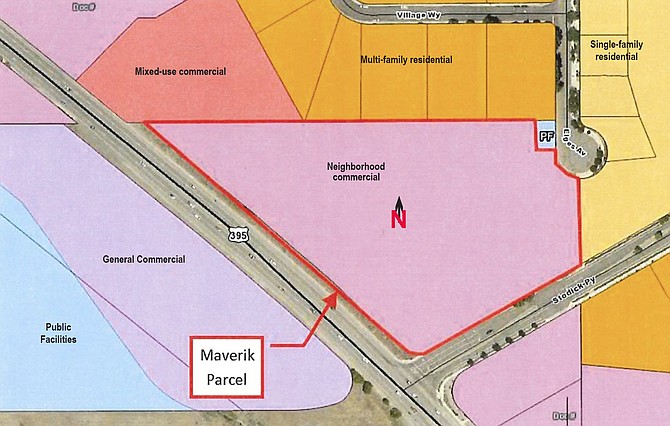 Third time might be the charm for a Gardnerville Maverik which is again seeking approval of a parcel map.

The company received approval from the Town of Gardnerville for a parcel map twice before but failed to follow up and let the previous two approvals expire.

The first time, the project was caught up in a change in how the Nevada Department of Transportation permits entries onto Highway 395.

Town Manager Erik Nilssen said that the company has only slightly adjusted the parcels.

Under the proposal scheduled to be heard at the Gardnerville Town Board on Tuesday, 4.55 acres of the 8.65-acre site would be reserved for the gas station and convenience store. A second .54-acre parcel would contain a retention basin dedicated to the town and the third, 3.56-acre parcel, would be sold in the future.

The entire site located at 395 and Stodick Parkway is zoned neighborhood commercial.

Because the project has taken so long, the design review the town did in 2019 has expired. A new design review will likely be heard in December, Nilssen said.

He noted that the store will significantly affect the intersection at Stodick Parkway.

At the state’s request, there will only be one driveway on Highway 395 and a median will be installed on the highway which will only allow right turns in and out. The company would also contribute 8.8 percent to the cost of a future traffic signal at the intersection.

According to a letter from the company, the gas station will have 10 pumps, with six in front and four for commercial fueling behind the store. Like the location in Minden, the store would be open 24 hours a day, seven days a week.

On Wednesday, the Minden Town Board will be reviewing a project on the vacant 3-acre site across Santa Anita Avenue from the new McDonald’s.

Developers plan to construct a Big Chicken and Firehouse Subs along with four stores on the site, with one including a drive-through.