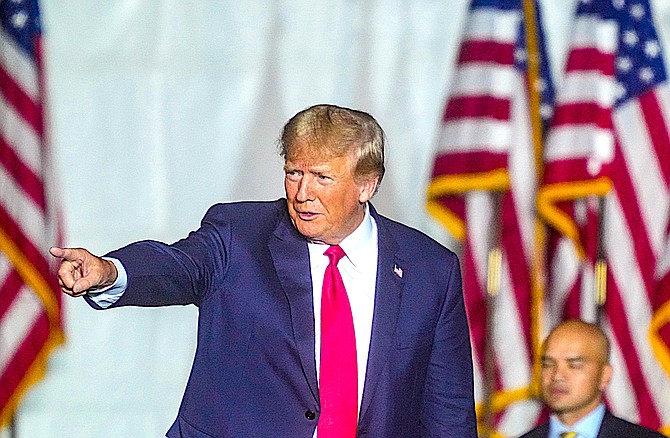 Former President Donald Trump points to the crowd on Saturday at a rally for candidates Adam Laxalt and Joe Lombardo on Saturday night.
Michael Chan | Special to The R-C

Former President Donald Trump told a cheering crowd in Minden on Saturday they have to turn out Nov. 8 to end what he called the radical Democratic madness now running the country.
“You’re going to send Joe Lombardo to the Governor’s Mansion and you’re going to send Adam Laxalt to the Senate and we’re going to end the crazy,” he told the crowd at the Minden Airport. “It’s the only way to end this madness if you want to watch the decline and fall of America and save the American Dream.”
Trump urged the crowd to vote in person on Election Day.

“It’s best to vote on election day,” he said. “It’s much harder for them to cheat that way.”
Trump said he won both in 2016 and again in 2020, saying he won by “millions of votes” in 2020 but the election was stolen from him.
According to official certified results, he lost by more than 7.05 million votes.
“The time to stand up to this growing tyranny is right now,” he said.
After brief comments about Laxalt and Lombardo, Trump talked about the stolen election and political attacks against him.
On the topic of the documents he had at his Mar-a-Lago home in Florida, Trump said previous presidents including Bill Clinton, George H.W. Bush and George W. Bush took millions of documents when they left the White House and no one ever accused them of a crime. He accused Barack Obama of taking “20 truckloads” of documents to Chicago when he left.
“By contrast, I had a small number of documents guarded by the Secret Service,” he said, contradicting FBI and court document reports.
He said that while they go after him, the National Archives has “lost the nuclear codes” and misplaced other secret documents while acting as though his keeping some documents is, “the greatest crime ever committed.”
He accused some unnamed officials of planting evidence.
Trump also referred to what he said was a “perfect call” to Georgia Secretary of State Brad Raffensperger in which he asked the secretary to “just find 11,780 votes” that would overturn Biden’s victory in that state. He said those on the phone call, “never expressed any outrage at what I said.” He said there were no protests and no one saying, “how dare you say such a thing.” He said that narrative didn’t show up until “months later.”
“All we were doing is protesting a fake and dirty election,” he said.
Trump said the Democrats are doing all this because, “they don’t want to run against me.” He said he leads in every poll because, as President, he said he did, “an incredible job.”
Whether he runs again, he said, would become clear in the near future.
He said his administration gave Americans the largest tax cuts in history while Biden has created the worst inflation in 50 years.
He called on the audience to help deliver an historic victory for the GOP to stop the “radical” Democrats.
Trump spoke for nearly 90 minutes to about 7,000-15,000 attendees, according to security.
The rally included Senate candidate Laxalt, Governor candidate Lombardo, secretary of state candidate Jim Marchant and attorney general candidate Sigal Chattah, Rep. Mark Amodei, who represents Congressional District 2; Sam Peters, candidate for Congressional District 4; Michele Fiore, candidate for state treasurer; Stavros Anthony, candidate for lieutenant governor; and Andy Matthews, candidate for state controller.