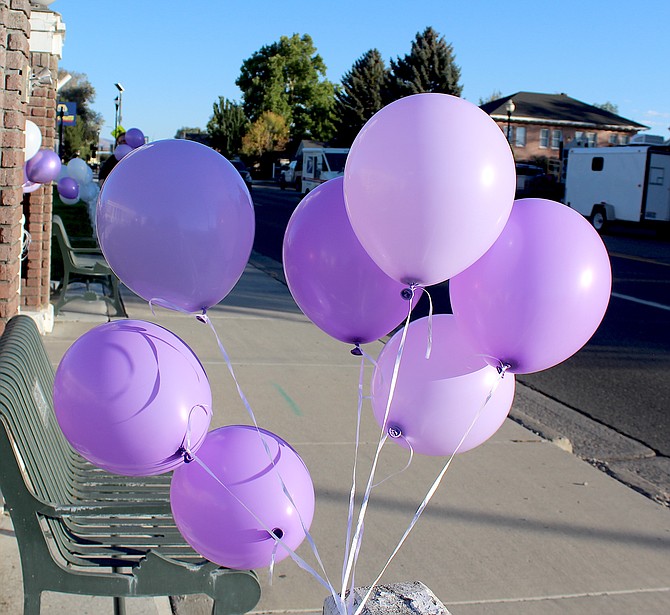 Balloons float in front of the Carson Valley Museum & Cultural Center that were later released as part of the candlelight vigil conducted by the Family Support Council.

Genoa, Nev. — Around 100 people turned out for a candlelight vigil in the lawn of the Carson Valley Museum & Cultural Center on Thursday evening hosted by the Family Support Council in honor of Domestic Violence Awareness Month.

The Trump flag seller is working in the parking lot of the old COD car lot in Minden, if you were looking to pick up some souvenirs for Saturday’s visit by the former president. County commissioners approved the permits for the event on Thursday. The ticket page at donaldjtrump.com was still open this morning if you want to try your luck.

I may make a quick jaunt up to Hope Valley this morning to scout out the color. The Aspen Festival is Saturday and Sunday. There’s a lot going on up there, so check www.alpinecounty.com/events

Kaki King is performing tonight at the CVIC Hall as part of the Arts Council concert series. I spotted a Studio Tour sign on my way home last night. You can find out more at www.cvartscouncil.com. Intero will be conducting its annual Chili Cookoff 11 a.m. to 3 p.m. Saturday at 1362 Main St., in Gardnerville.

People at the candlelight vigil mentioned how warm it was last night, when usually the fall chill has set in by now. It was 83 degrees in Gardnerville at 5 p.m. Not a record, but certainly warm for the first week of October. We’re running about 10 degrees above average this week.

We’ve got more of the same on tap for the weekend, with the high temperature today forecast to hit 83 degrees under sunny skies. It’s supposed to cool off down to average next week