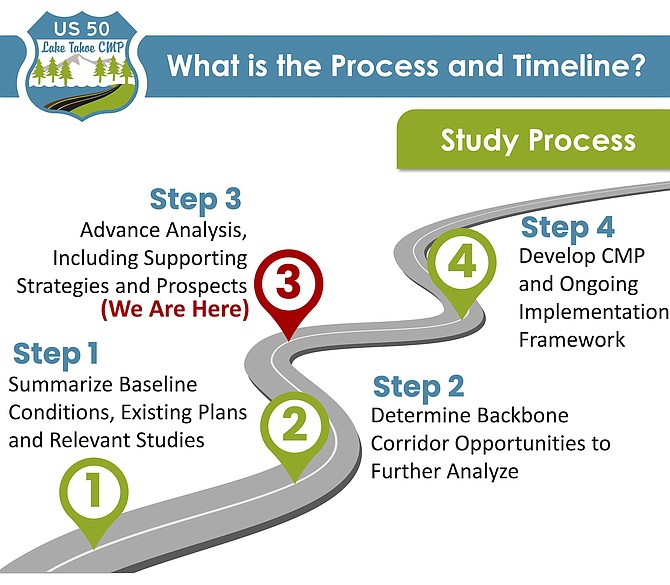 The Highway 50 corridor plan is in its third stage.

Discussion of the Highway 50 Tahoe East Shore Corridor Management Plan likely won’t return to the Douglas County commissioners until early 2023, according to an email to the county from consultants working on the plan.

Around a dozen Douglas County residents spoke at Friday’s meeting of the Nevada Department of Transportation Board of Directors.

“Based on the extensive public feedback regarding the (plan) following the two public canvassing meetings, the study team feels it prudent to change the timing of engaging your board of county commissioners,” Wood Rogers Principal Engineer Bryan Grant said in a note to Community Development Director Scott Morgan. “This will give the study team time to continue to synthesize public comments, as well as complete a thorough review of the publicly proposed alternative concept.”

Grant said he would keep the county apprised of their progress but said February would be a more realistic timeframe to engage with commissioners.

Residents are seeking to delay completion of the Highway 50 Tahoe East Shore Corridor Management Plan, which would reduce some parts of the highway down to two traffic lanes in places in a move the state says will increase safety.

The Nevada Department of Transportation plans to complete its Highway 50 at the end of this year and said it has found mixed reactions from the proposed concept of reconfiguring three portions of the highway from four to two.

Average daily peak-season traffic has grown substantially on the highway since 2014 and during a recent four-year period, crash rates were more than 50 percent higher between Elks Point Road and Glenbrook Drive when compared to similar highways across the state.

“We have gathered extensive feedback since summer of 2021 as part of three public listening tours,” said NDOT Public Information Officer Meg Ragonese. “Some of the things that we heard, there’s definitely a consensus that community members know something needs to be done to address traffic safety and access concerns on US 50.”

The proposed corridor concept would see the reconfiguration of the highway to two lanes from four in three high-crash and constrained areas, along with new turn lanes and the possibility to prohibit parking on the side of the highway.

The study team has made the recommendation to use the single bound lane reduction option for the segment from Glenbrook to Logan Shoals, which will act as a speed check for vehicles traveling from Spooner Summit. A three-lane option with one lane on either side with a center turn lane is recommended for the segments from south of Logan Shoals to Skyland and south of Zephyr Cove Resort to Round Hill Pines. These areas are considered to be the most constrained and would benefit the most.

“This will help provide safer access to and from the highway, but

Officials consider reconfiguration for sections of Highway 50 will also bring travel speeds down closer to the speed limit of 45 mph,” said Ragonese. “Those segments proposed for lane reconfiguration will take an additional two minutes to travel through as a part of the full 13-mile corridor.”

A traffic analysis for the study found that nearly one-third of the crashes spanning from Spooner Summit to the California state line involved high speeds, and 60 percent of the crashes occurred in clear weather. Impairment was a factor in the majority of the fatalities.

There has been a mixed consensus among community

members on the proposed changes for the highway, with concern for the need to evacuate in the case of a fire, as South Lake Tahoe residents had to do during the Caldor Fire in

County commissioners meeting to protest the proposal to alter the configuration of the lanes.

“Some community members are in favor of [restructuring the lanes] and others have asked if it has the potential to create traffic gridlock,” said Ragonese.

“Those smaller segments of reconfigured lanes provide safer access … So it is proposed to both enhance access to and from the highway by providing more designated safe turn lanes, but also enhance safety for everyone traveling on the corridor by reducing the speeds to close to the speed limit.”

NDOT has held nearly 50 meetings, primarily with stakeholders, over the last two years, with three public listening tours and almost 700 interactions with the public and stakeholders to gather their feedback, Ragonese said.

The public meetings held in June 2021, March/April and October/November 2022 found there is support for eliminating parking on US 50 and a need for intersection improvements at SR 28, along with the need for roadside multimodal improvements south of Elks Point Road.

Strategies named in the study will be considered and prioritized as a part of any future projects in the corridor, and when finished, should provide a “high-level visitor for potential options to improve traffic safety and mobility for all transportation sites,” according to Ragonese.

Outside of the study, NDOT is currently working on improvements to the highway that are scheduled to begin in the near future.

“We will install a traffic signal at US 50 and Warrior Way that will help provide safer access to and from the highway and Warrior Way,” said Ragonese. "We also plan to repave approximately 13 miles of the highway between Stateline and Spooner Summit within the next five years. That will be consistent with the findings and general direction of the Corridor Study, but that really is something that is necessary just to preserve the roadway surface.

“What we’re looking to do is with public and stakeholder feedback, establish that blueprint for future projects over the decades that could take place independently on US 50 and make sure future projects would align with community visions for the highway,” Ragonese added.

NDOT is currently partnered with a number of organizations on this project, including the Tahoe Regional Planning Agency Metropolitan Planning Organization who is the colead on the study, the Tahoe Transportation District, Nevada Highway Patrol, and the Washoe Tribe.

To learn more about this study, visit Highway 50 corridor plan