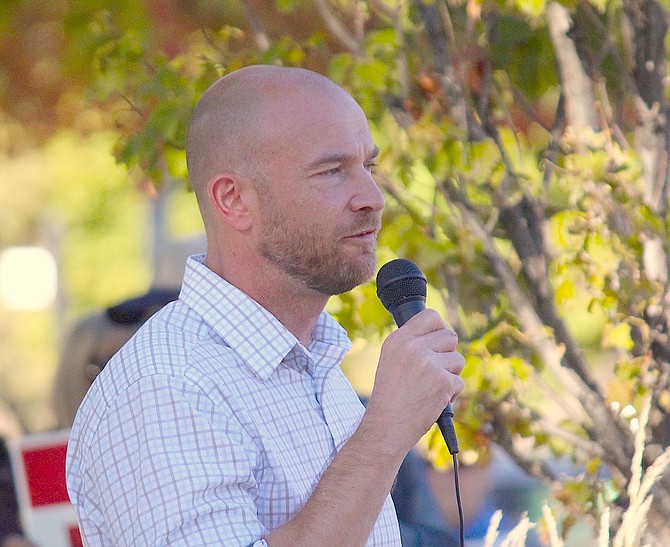 Republican Andy Matthews, won his race for Nevada controller, speaks at a rally held in Minden Park on Oct. 27. Election results were a mixed bag with voters electing Republicans and Democrats to state office.
Photo by Kurt Hildebrand.

Paper ballots accounted for almost 65 percent of the votes counted by the Douglas County Clerk’s Office by Veterans Day.

The 18,984 ballots that every active voter received in the mail were clearly a popular option, with early voting at a polling station seeing 5,564 and only 4,707 voters turning out on Election Day for a total of 29,255 votes cast as of Tuesday evening.

While it’s unlikely there’ll be much of a change in the distribution of paper ballots before 2024, Clerk-Treasurer Amy Burgans said she shares the concerns of North Valley residents who had to travel into the Valley to cast a ballot.

The closest to a polling location almost a quarter of Douglas County’s electorate living in the north county had was the roving ballot box that spent a couple of days each at the Sunridge and Johnson Lane fire stations.

“The north county doesn’t have a spot,” she said. “It’s not fair that they have to come all the way down here to vote.”

Burgans said the lack of election workers to work the polls is the main sticking point in establishing polls in the north county.

“It’s a staffing issue,” she said. “We had 100 election workers, and we were not overstaffed on Election Day. Unless we can recruit some more, it will be difficult to establish another polling place.”

She said she’s going to start looking for a spot for a polling place in the north county. Voters previously used election machines at the Sunridge Fire Station.

As to the staffing issues, she said she and her team are brainstorming solutions for 2024.

“We’ll start planning next August and taking applications in September,” she said.

The implementation of a new check-in process in 2018 that required a secure connection to the polls so workers could compare residents’ signatures is no longer a factor.

Senate candidate Adam Laxalt cited paper ballots as one of the hurdles he had to overcome on Tuesday.

“This is not a form of voting Republican voters prefer, so as those ballots were tabulated, they skewed heavily towards Democrats up and down the ballot, including our opponent,” he said in an email conceding his race on Tuesday. “Going forward, Republicans will either have to fix our election laws or better adjust to them and to the tactics used against us.”