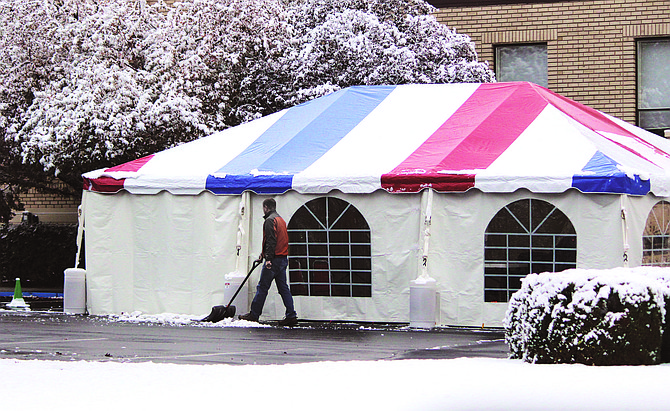 A county worker shovels snow from around the Election Tent on Thursday. Voters should bundle up on Tuesday if they plan on using a voting machine in Minden.

While voting often is a felony, voting early is a good idea, especially if you’re counting on the mail to deliver your ballot, Clerk-Treasuer Amy Burgans said on Wednesday.

Burgans urged voters planning to mail their paper ballots do that as quickly as possible, because there’s a chance ballots mailed on Election Day won’t make it in time.

Ballots have to be postmarked Nov. 8 to be counted, but even those mailed on Tuesday will have a shortened delivery time because there’s no mail delivery on Veterans Day. The deadline for mailed ballots to arrive at the clerk’s office to be counted is Nov. 12, but if there’s an issue with a signature on the ballot, that will be after the deadline to cure them.

She said elections workers will be available on the holiday to help cure ballots, but the 11thhour of the 11th day will be the last time voters can fix signatures or other issues.

Burgans said she expects more than 11,000 voters to cast their ballots on Tuesday.

“Just from the primary, 50 percent dropped off their ballots on Election Day,” which she said amounted to 5,000 paper ballots. “We prefer people drop them off. I can guarantee they will be counted if they’re dropped off, but I don’t work for the post office.”

Voters will need to drop off paper ballots by 7 p.m. Tuesday in order for those to be counted.

“I had someone come up with a ballot after 7 p.m. in the primary and I had to turn them away,” she said. “She was so mad at me, but the law is the law.”

Timing isn’t the only challenge voters will face next week with stormy weather in the forecast.

“The main thing is the Community Center is indoors and the Courthouse is in the tent,” she said. “People need to be aware to dress for the weather.”

She said election machines will be available at five locations, including the TRE, Washoe Tribe and Kahle community centers, as well as the Douglas County Community & Senior Center and the Election Tent behind the courthouse. Voters may cast a ballot at any of the open polling locations

She said they weren’t prepared for the number of voters at the Douglas County Community & Senior Center during the primary, but they’re reserving the gym floor for Tuesday.

“We had 10,000 voters in the Gardnerville Ranchos who weren’t aware they could go to Dresslerville,” she said.

While election workers will be able to prepare paper ballots that arrive by Monday for counting, any that are dropped off or arrive in the mails on Tuesday will have to wait until Wednesday.

She said the entire election crew will be working the polls on Election Day, which doesn’t leave anyone to process paper ballots.

She said that means any paper ballots that arrive on Tuesday either through the mail or in person won’t be included in results issued on Election Night.

Those results will include all votes cast on a machine or those that arrived by Monday.

Results must wait for the polls to close statewide and the Nevada Secretary of State’s Office gives the OK.

“I have to close down the vote system before we can start,” she said. “I doubt results will be released earlier than 10 p.m. I tell people that results aren’t official until Nov. 18 when commissioners canvass the vote.”

Burgans pointed out this is only the second election she and her team have conducted.