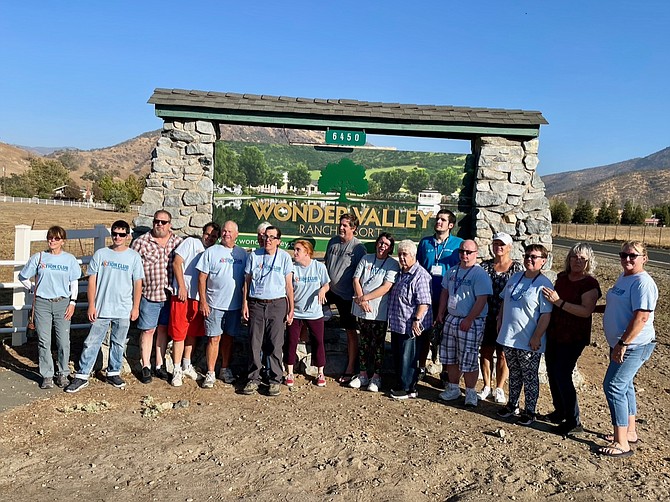 The conference included participation in one service and one craft project. Aktion Club members packed backpacks for the homeless and took part in a Red Cross preparedness education program focused on fire awareness and safety. Members were given a sturdy pillowcase to personalize and use as a container to build their own emergency supplies kit.

The trip was made possible through generous donations and funding from the Nevada Governor’s Council on Developmental Disabilities, Douglas County Sheriff’s Office, Dean Seeman Foundation, Brenda and Raymond Roberson, and Kiwanis Club of Carson Valley.

The mission of Kiwanis Aktion Club is “to provide adults living with disabilities an opportunity to develop initiative, leadership skills, and to serve their communities.” Find more information at aktionclub.org.

On Nov. 5, the Tahoe-Douglas Elks Lodge No. 2670 sponsored their annual Hoop Shoot at the Douglas County Community Center. Local elementary school-age children gathered to compete for a chance to participate in the national championship which takes place April 22, 2023, at the Wintrust Arena in Chicago.

Tahoe-Douglas Elks Secretary Dave Stewart said the local Hoop Shoot was a lot of fun for all involved, including the competitors, their parents, and the Elks volunteers.

Best of luck to these terrific athletes.

Bears still out and about

A couple of days after Daylight Saving Time came to an end, I headed out with my dog for an early evening walk. It was darker and colder than I’d anticipated, so I hurried us along to keep warm and get a little distance in before it got too late.

We hadn’t been out very long when I heard a vehicle approaching from behind. It slowed down as it came near, and I stopped on the sidewalk at the same time a truck pulled alongside us on the road. The man behind the wheel rolled his passenger window down and leaned across the seat to tell me that he’d just seen a bear jump a fence close by. This good Samaritan had spotted me walking and went out of his way to warn me of the potential encounter.

I thanked him profusely, and my dog and I hustled home on high alert. I figured if a bear saw or heard us it would likely run the other way, but I didn’t really want to find out.

I’m so grateful to this gentleman for noticing the bear and for his kindness in taking the time to look out for my dog and me. Let’s hope the bears make their way back toward the wilderness soon so they can find a suitable resting place and settle in safely for the winter season.