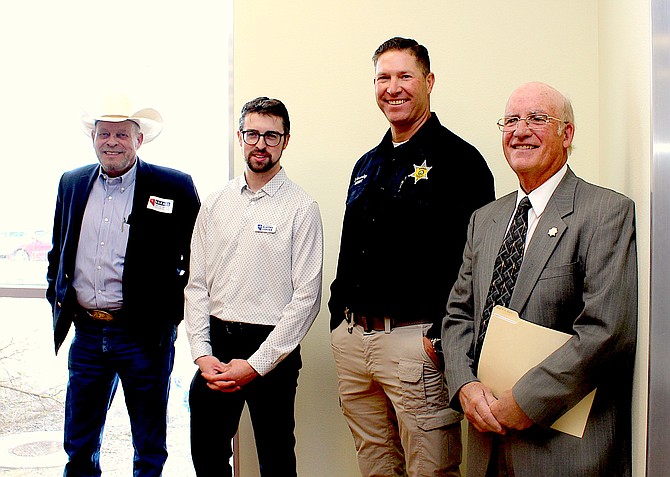 Candidates Jim Wheeler and Blaine Osborn with Sheriffs Dan Coverley and Ron Pierini at an April 21 rally for Adam Laxalt at the Douglas County Community & Senior Center in Gardnerville.

We would say that the election is heating up but the reality is that it’s been running pretty hot for years, with only an occasional respite from the constant drum beat for our attention.

Next week, the Carson Valley Chamber of Commerce, the Business Council of Douglas County and The Record-Courier are conducting their traditional election forum at the Douglas County Community & Senior Center.

The June Primary will see most of the local races wrap up, so it will be a good opportunity to hear the candidates, including Rep. Mark Amodei and challenger County Commissioner Danny Tarkanian.

Both legislative seats representing Carson Valley are up for election this year in what we’re calling the Lyon-Douglas Debate.

In her first election since she was appointed Clerk-Treasurer Amy Burgans will debate Heather MacDonnell.

Wes Rice, the only Douglas County commissioner seeking re-election, is facing a challenge from Natalie Yanish and Janet Murphy.

Doors open for the debate at 5 p.m. with the trouble starting at 6.

Settelmeyer and Airport Manager Bobbi Thompson will serve as moderators.

Every one of the local candidates on next week’s bill is a Republican, which means all of these races will be decided in the primary.

Nevada’s closed primary essentially shuts out nonpartisan and minor party voters representing more than a quarter of the county’s electorate.

Half of the county’s 40,673 active voters are Republicans, which means most partisan races, like county commissioner or clerk-treasurer are resolved in the Republican primary.

The county’s 8,341 active Democrats, who are having precinct meetings and their county convention on Saturday, will get to weigh in on statewide races to determine their nominee for the general in November.

The big race on everyone’s ballot is for Douglas County School Board where candidates Dave Burns, Roberta Butterfield and Nick Brashears are vying for a spot on the general election ballot. Should any of them receive 50 percent plus 1 of the vote, that will be the end of the election.

Good luck to all of those who’ve stepped forward to participate in the biennial adventure in politics.