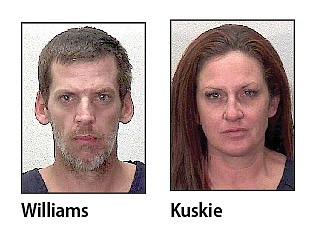 A couple found in possession of around two dozen credit cards belonging to someone else may face up to four years in prison each.

Jeffrey Alan Williams, 40 and Dawn Michelle Kuskie, 38, were arrested Oct. 9 at the Gardnerville Dotty’s. Deputies checked the registration of a gray Lexus parked at the casino and found it belonged to Kuskie, who had an active warrant from Nevada Parole and Probation. She was taken into custody.

Williams got out of the passenger seat and identified himself as a 25-year-old with green eyes. According to court documents he tossed his ID under the car. Upon retrieving it, deputies learned that Williams also had a warrant out of Clark County.

A search of the vehicle led to a small amount of methamphetamine and a large number of credit cards and IDs belonging to people other than the couple.

Kuskie admitted to possession of a controlled substance and possession of debit or credit cards without the card holder’s permission. She is scheduled for sentencing on Dec. 9.

Williams is being charged with providing false information to resist arrest and possession of debit or credit cards without the card holder’s permission. He is scheduled for sentencing on Jan. 9.

According to court documents, Robert Blaik Jorgenson, 42, was sentenced in March for possession of a controlled substance. At the time of sentencing, he was told by District Judge Tom Gregory it was time to stop getting arrested for having drugs.

Jorgenson admitted to several violations including, failure to report to Nevada Parole and Probation, failure to test, provide residence, maintain employment and possession of a controlled substance or alcohol.

His probation was revoked and he was ordered to serve his underlying sentence of 12-30 months in prison. He was given credit for 82 days he served in jail.

• A bench warrant was issued for Jessica Lynn Demarco on Monday in the amount of $3,000 cash for Northern Nevada counties. Demarco failed to appear in District Court on Monday.

• A woman, who was using someone else’s identity to avoid a warrant, received simultaneous 1-4-year prison sentences.

Pamela Renee Gower, 34, gave someone else’s name when she was pulled over June 4 in an unregistered Mercedes Benz on Highway 395 near Muller Lane.

K-9 Riko alerted on the car and .9 grams of methamphetamine and needles were found inside along with 13 credit cards in other people’s name.

She was released on bail five days later but failed to comply with her release conditions and had to be brought back by a bail bondsman in August, who revoked her bond.

She was given credit for 72 days. She admitted the charge on Sept. 12.

According to court documents she has two misdemeanor holds in Reno and has prior convictions and multiple parole violations.

She appears in a sex offender registry in Mississippi.

• A woman who failed several drug tests and was terminated from Western Nevada Regional Drug Court faces up to four years in prison.

Anita Raya was placed in treatment on Aug. 22 and left the same day. She got a new program on Oct. 3 and left on Oct. 5.

She faces up to four years in prison and a $5,000 fine, though she might be eligible for probation.