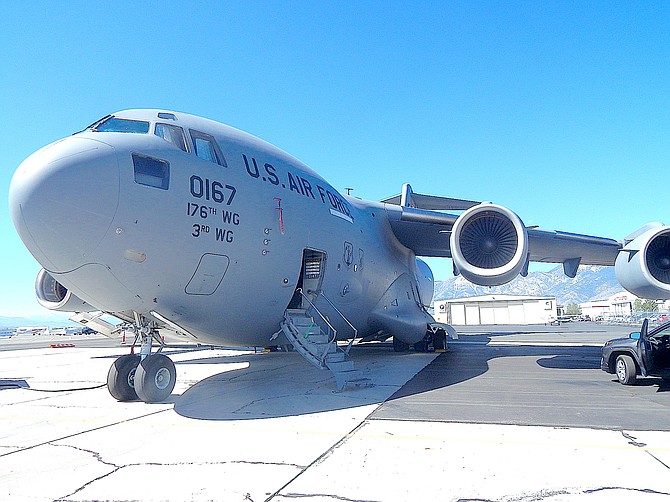 A C-17 became part of the Sports Aviation Foundation tour on Saturday after experiencing mechanical difficulties.
Photo by Sarah Drinkwine.

For what might be the first time in Carson Valley’s history, a World War II vintage B-29 Superfortress landed at Minden-Tahoe Airport on Monday.

“It was an opportunity for people to see some of the cool planes we use and to really focus on and encourage the youth to learn more about planes and what we do and to plant the love for aviation,” said Sports Aviation Member Kathy Bradford. “There are many different areas of aviation someone can get into; you don’t have to be a pilot.”

During the open house children of all ages and families explored the planes on display at the airport from one built in the 1920s to a U.S. Air Force transport plane.

Past President Linda Mae Hivert said the aircraft wasn’t part of the event, but landed at the airport for due to a mechanical issue. Even so, the open house participants were excited to see the massive plane and gathered to watch it take off.

“We’ve learned about a lot of different planes and it’s been fun to explore them,” said 7-year-old Colton Sierakowski. He said his favorite was the glider planes.

The Sports Aviation Foundation was created in November 2011 as the Minden-Tahoe Airport’s segment of the Douglas Economic Vitality Program. As a 501c3 nonprofit, there are three main components of the foundation; to enhance safety, economic vitality, aviation heritage and excite the youth in the fields of math and science.

“Youth aviation is fundamental to the future of flight,” said Sports Aviation Foundation President Mike Bradford. “We want to share some of our aviation related activities as well as encourage support, donations and continued membership from the community.”

One of the planes displayed during the open house was a Murphy Rebel single-engine airplane, built by high school students in the Build-a-Plane Program.

The Build-a-Plane program is for high school students where they learn to assemble an airplane by cutting aluminum sheets, drive rivets, and generally do all aspects of the plane’s construction and assembly.

The Youth Aviation Adventure is another program for 12-18 years old to advance their interest and understanding of aviation through hands on experience at various learning stations and different facets of aviation, from piloting, mechanical, navigation and more.

In the Civil Air Patrol Cadet program, 12–18-year-olds are challenged and educated in the roles of leadership, aerospace education, fitness and character development. They are offered flight time in the squadron’s glider and powered aircraft. For more information visit Douglas County Composite Squadron CAP on Facebook.

“That’s what it is all about, aviation is starving for young people right now,” said glider pilot Bob Trumbly. “We want to get them interested as they’re going to be our future mechanics, engineers, pilots, etc.”

The Sports Aviation Open House also introduced plans for the Sports Aviation Complex which will be on the east side of the airport, complete with a viewing pavilion, hangar, aircraft display and glider assembly.

“SAF is actively working on creating a viewing pavilion,” said Bradford. “We are working on finalizing the designs, costs and fundraising needed to complete this community asset, not only useful to the soaring and aviation community, but also non-aviation folks, a better working space for the build a plane project, education programs and aviation heritage.”

Other programs offered at the Minden-Tahoe Airport include learning to fly in the High Sierra Pilot’s Flight Club, Soaring NV’s gliding lessons and tourist rides, and sky diving.

Coming up next for the Minden-Tahoe Airport is the Aviation Roundup ib Oct. 1 and Oct. 2, where the Blue Angels are a featured guest. For more information visit www.aviationroundup.com