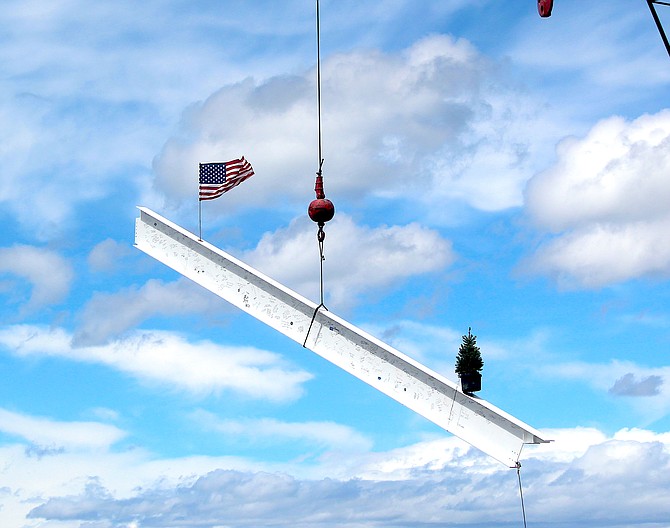 A beam carrying signatures is moved into place on Friday afternoon.
Photo by Kurt Hildebrand.

Carrying the signatures of scores of people, a beam floated serenely into place at the top of an events center at Stateline on Friday afternoon.

About 80 people attended the ceremony and participated in tours of the center at the Tahoe Douglas Visitors Authority Events Center.

Longtime Lake Tahoe advocate and former Carson Valley Chamber of Commerce Director Bill Chernock said the first meetings to come up with some sort of venue like the one going up at the corner of Highway 50 and Lake the Parkway occurred in 1991.

“So far, we’re closer to being on budget than on time,” Longtime advocate Lew Feldman said.

The land for the center was donated by Edgewood Companies.

“Without their donation we wouldn’t be having this conversation,” he said.

The Tahoe Douglas Visitors Authority sold $100 million in bonds in 2020, Feldman said, based on hotel occupancy.

“Which at the time was zero,” he reminded participants.

The events center is a 138,000 square-foot, multi-use facility that will host concerts, conferences, sporting events and more.

The project was delayed by the Tamarack Fire and record precipitation in December.

“Delays are part of mountain living,” he said.

The goal for the center is to have 130 events and create 300 jobs a year, with $25 million annually contributed to the community.

One of the conditions of the center is to provide a microtransit shuttle to transport 9-14 passengers who call from an app. He said private partners have raised $600,000 to fund the shuttle and that they would be making a presentation to county commissioners on May 23.

Tahoe Douglas Visitors Authority Carol Chapin said materials brought to the surface during Clean Up The Lake’s 72-mile SCUBA clean-up of Tahoe will be used to created a sculpture for the center.

People can vote on whether they want Building 180 artists Joel Dean Stockdill and Yustina Salnikova to produce a sculpture of an eagle, a Lahontan cutthroat trout, or a Sierra Nevada red fox.

Visit tahoesouth.com/surfaced-art to vote on one of the three options.