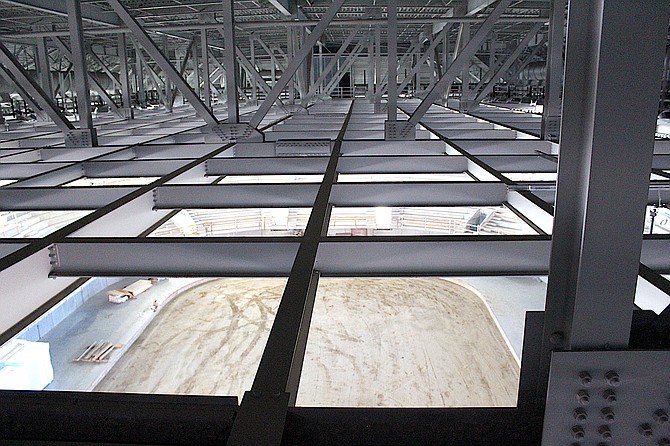 A cat walk's view of the Tahoe South Events Center under construction at Stateline.
Photo by Kurt Hildebrand.

Workers are scrambling to get as much dirt work done at the Stateline Events Center before the Tahoe Regional Planning Agency’s Oct. 15 deadline.

Once that deadline passes, work will shift to the interior of the largest single project underway in Douglas County.

Core Construction Project Manager Taylor Laack said opening of the center is scheduled for July 6, 2023, depending on when materials arrive.

The 138,000-square foot center has been under construction since June 2021 at the corner of Highway 50 and Lake Parkway.

In May, the Tahoe Douglas Visitors Authority conducted a beam placement at the events center, which has been a more than 30-year goal for Lake Tahoe tourism officials.

Work on the project has seen some delays from the record December storm and supply issues.

One delay may be from the requirement the center establish a micro-transit system for people to attend events.

The transit system has been operating since July, with more than 20,000 rides in the first three months, according to officials.

“The micro transit project is viewed as an overwhelming success and it will only get better with the financial support it deserves,” Tahoe Douglas Visitors Authority Director Carol Chapin said. “Let's not forget that Douglas County is required to contribute toward transportation projects in the Tahoe Township. This is not about geographical equity; this is about a vision to reduce vehicle miles traveled, enhance the visitor experience, and provide our residents with a free and frequent option to a private vehicle.”

Douglas County commissioners balked at approving a request to contribute to funding the system at their Sept. 16 meeting, saying they wanted more detail.

On Thursday they approved $1.385 million from the Tahoe Douglas Transportation District to fund the Kahle Complete Street Project after praising the presentation.

While it’s possible that funding for that work will come from Congress by next spring, County Manger Patrick Cates said there’s still a possibility it won’t be approved.

Nevada Tahoe Conservation District Manger Meghan Kelly said some of the grants she’d received to complete the project expire in December 2024. The project should be bid in March and work would start in summer 2023.

Because of Tahoe’s short construction season, it might not be completed next year.

Kelly said she’s been working on the project since 2014.

Like the microtransit, the Kahle project will benefit residents of Stateline.

“That neighborhood has the highest percentage of residents who walk to work,” she said. “There are also lots of bus routes. We’re upgrading that area to be safe for all kinds of users.

The work will also prevent Kahle from eroding into the Lake, improving its clarity.