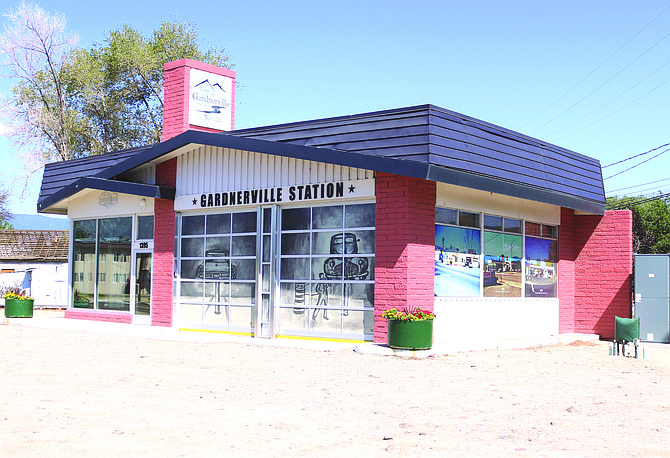 Work on Gardnerville Station was put on hold last week after bids for work on the storm drainage infrastructure came in at twice estimates.
Photo by Kurt Hildebrand.

While envisioned as a gateway to Gardnerville, the former Eagle Gas Station was also expected to serve a deeper purpose of reducing flooding in the S-Curve.

While most of the work above-ground on Gardnerville Station has been completed, work on the flood infrastructure beneath it stalled on Tuesday when town board members rejected bids for the final piece that would empty an already installed retention tank under the parking lot.

“Frankly, we don’t have the money to enter either of these contracts,” he said of the two bidders.

He said a lot of the issue is uncertainty over receiving the pump and piping, which could take as long as four months.

Between $250,000 in American Recovery Act funds allocated by commissioners and $400,000 the town budgeted, Nilssen said he was confident the project would be completed.

The state is scheduled to resurface Highway 395 next spring, which is when the state will install the inflow to the 13,000 cubic foot retention base under the parking lot.

Nilssen pointed out that the Nevada Department of Transportation is dealing with the same economic constraints.

“It’s just a horrible time to be doing construction,” he said.

In the meantime, the town board authorized the purchase of the pump and controls for around $20,000, which will allow the town to rebid it without a contractor concerned about whether those things will be available.

Nilssen said that by the beginning of next year, there will be more money in the town’s budget and bidders will be able to focus on the actual work instead of acquiring the means to empty the basin.

The 2013 resolution transferring the property to the town specifically listed storm drainage as one of the goals, something then-Town Manager Tom Dallaire suggested when he pitched the project.

Completing the underground portion of the project would reduce flooding in the Gardnerville S-Curve and allow the town to finally pave the parking lot nearly a decade after the project was first envisioned.

The project to convert the former gas station into a visitors’ center has been the largest single recipient of community development block grants in Douglas history, receiving $539,350 over its lifetime.

The property has seen some sort of refueling station for around a century. With charging stations, it continues its original use in addition to being a meeting spot for Main St. Gardnerville.