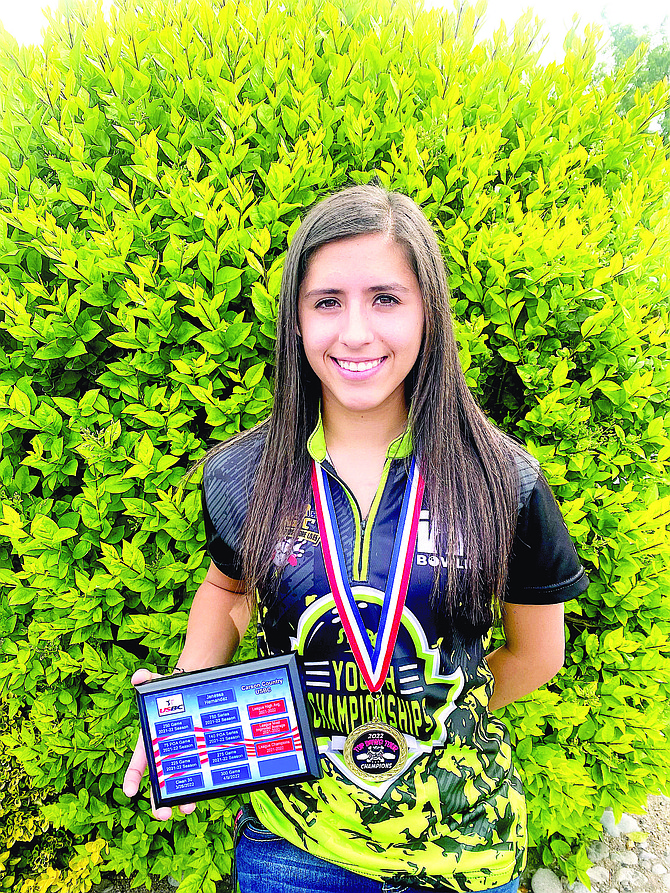 Jenessa Hernandez poses with her plaque that shows her achieve-ments from the 2021-2022 season.
Photo by Haley Estabrook.

Gardnerville 16-year-old bowler Jenessa Hernandez said she is ready to take a leadership “roll” in her league.

Hernandez, who started bowling when she was 11, will be a senior at Douglas High School next year.

Hernandez wanted to “get interested in something that was fun and competitive.”

She is part of the U.S. Bowling Congress, which allows her to compete at tournaments. Hernandez has three coaches — Dave Dickey, Allan Powers and Max Cutright.

In 2019, she was invited to Teen Masters in Florida to compete. She went with her brother, Anthony Hernandez, who now bowls at Hastings University, and said that this was one of her favorite memories as they “had the time of their lives together there.”

Hernandez has earned almost $4,000 in scholarships and her personal goal is “to earn as much scholarship money and be able to go to college.”

She has completed numerous awards that are recognized on a national level as well as league recognized awards.

“I just kept doing my normal thing and I kept going with the flow,” said Hernandez. “On that last shot, I was so shaky, and I was so nervous. I thought I was going to mess up, but I ended up hitting it right where I needed to and got my 300.”

Her next goal is looking to complete her first 800 series where she needs a total score of 800 in three games. She needs to average around 267 each game to make this possible. Her highest series total so far is 766.

Hernandez has found a new family in the bowling community.

She branched out by meeting people outside of Nevada and outside of the country through bowling. She has also been able to explore Laughlin, Las Vegas, Florida and Michigan while participating in different tournaments.

Hernandez said that she wants children to get involved and that she is willing to help them with anything.

“They can experience things themselves and go to tournaments and have fun,” Hernandez said. “They get to meet new people and get out there. “(I can) show them what they can do as far as just themselves. They don’t need someone holding their hand every step the way. This is something that is more of an independent sport.”

Hernandez has taken on a veteran role in her 12-bowler league.

“I have gotten approval from every coach that I am able to help the little kids by coaching them as well,” said Hernandez.

Hernandez shares that her bowling has made her “closer to the community” and it has helped her grow as a person. She encourages others to try bowling.

“Bowling helps you build up confidence and to work on yourself. It helps with your mental game as well.”

Carson Lanes is holding a bowl-a thon fundraiser on June 26 to assist the UCSB in travel expenses for state and national tournaments for Hernandez and three other bowlers to Michigan. Donations may be made “per pin.” People may also donate at the Bowl-a-thon. To find out more about the fundraiser, contact Marty at 775-232-4770 or at ccusbcyouthbowling@yahoo.com.