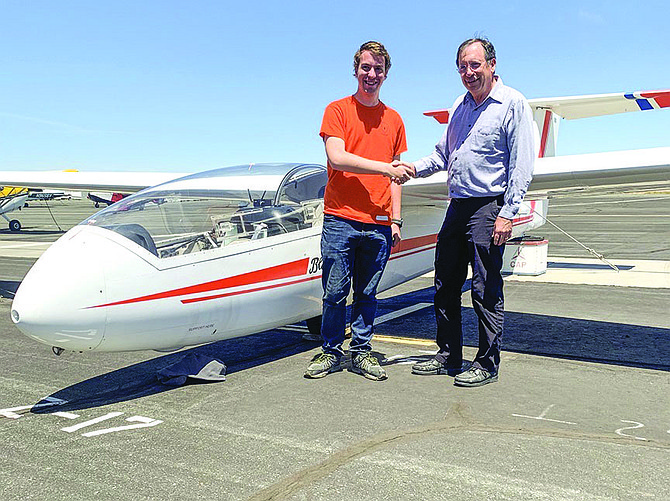 The CFI-G requires a commercial pilot certificate, an oral exam, a course on the fundamentals of instruction, 15 hours of pilot in command time, and a practical exam. Ivan’s “check ride” consisted of two flights demonstrating maneuvers to commercial standards, including a simulated tow rope break at just 200 feet above ground. The last two flights concentrated on correcting common mistakes made by his examiner, Mark Montague of Reno.

“It’s been a long road to get to this point since my first glider flight in 2017,” Ivan said. “I didn’t even know what a glider was until that point!”

Ivan’s instructor was Lt Colonel Elizabeth Tattersall, who has been Ivan’s glider instructor from the start of his glider flying career. Ivan’s tow plane pilot was Colonel Russ Smith, and he was assisted on the ground by Ruth Ann Van Vranken from the Reno Composite Squadron.

“There are countless others I could name and thank,” Ivan said. “None of it would have been possible without the amazing people of Douglas County Composite Squadron and CAP.”

Established in 1941, Civil Air Patrol is the official auxiliary of the U.S. Air Force and is a member of its Total Force. In its auxiliary role, CAP operates a fleet of 555 single-engine aircraft and 2,250 small Unmanned Aircraft Systems and performs about 90 percent of all search and rescue operations within the contiguous United States tasked by the Air Force Rescue Coordination Center. Often using innovative cellphone forensics and radar analysis software, CAP was credited by the AFRCC with saving 108 lives last year. CAP’s 56,000 members also perform homeland security, disaster relief and drug interdiction missions at the request of federal, state and local agencies. As a nonprofit organization, CAP plays a leading role in aerospace education using national academic standards-based STEM (science, technology, engineering and math) education resources. Members also serve as mentors to over 23,000 young people participating in CAP’s Cadet Programs.