Man sent to prison in eluding 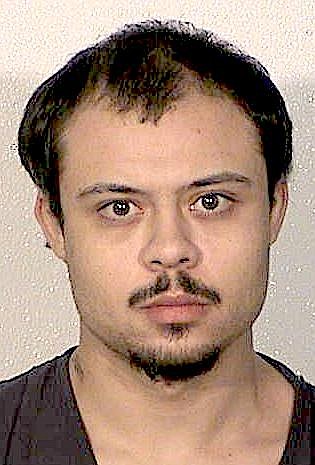 A man who was ordered to a correctional bootcamp that no longer exists must now serve out his time in prison.

Donald Earl Robertson, 22, led authorities on a high-speed pursuit in March from Topsy Lane north, running red lights and reaching speeds of up to 100 mph and in a vehicle that was taken from the parking lot of St. Mary’s Hospital while the owner was at work.

• A man who battered a deputy received a suspended 12-30 month prison sentence on Tuesday.

Benjamin Roland Blackowl was found inside someone else’s vehicle in Gardnerville in February and struggled with deputies when they tried to get him out.

Blackowl and his attorney asked that he complete the conditions of his probation while serving jail time.

“I was acting out,” said Blackowl. “I like to treat people as I like to be treated and I knew I was in the wrong. It was drugs and alcohol mixed with things going on in my life and I know better now, that’s not something I would have usually done.”

Blackowl said he would be more likely to complete the conditions of probation while under the supervision of the jail.

Blackowl will serve 364 days in Douglas County Jail. He is given credit for 150 days.

• A man who stole $15,000 in silver bars from a Douglas County family received a suspended 2-5-year prison sentence Tuesday.

According to court documents Mark Duncan, 41, took 55 pounds of silver bars from his parent’s home in November.

As conditions of his probation, he must be employed full time and complete drug court.

“I agree that you do need to go to jail, but with the victim being 77 years old, I don’t want them to wait that long for restitution,” said District Court Judge Tod Young.

Duncan is given credit for 86 days.

• A former Gardnerville resident with a long history of drug offenses acknowledged his drug problem Tuesday and asked to remain in jail as a condition of his probation.

Joshua Labryant Edwards, 36 was sentenced to a suspended 12-48 months in prison for two counts of possession of a controlled substance for having methamphetamine and heroin when he was arrested in March.

According to court documents, he has been trafficking and using drugs since at least 2015.

Edwards told the court to not let him out.

“I want help and I need help,” said Edwards. “I was scared to get out. It was a big possibility that I would have used, not saying I would have, but that possibility was there.”

As a condition of his probation Edwards will spend 60 days in Douglas County Jail and participate in Drug Court. He was given credit for 85 days served.

• A California woman who was arrested on a $100,00 warrant for a weapons charge and found with four loaded hypodermics inside a purse in May admitted to possession of a controlled substance and possession of burglary tools Tuesday.

Ruby Sue Haworth, 22, was arrested during a traffic stop on Highway 395 near Grant Avenue May 30. According to court documents, the 2004 Volkswagen Passat she was driving had expired plates and Haworth didn’t possess a driver’s license or insurance. A background check revealed a warrant and a search of the vehicle led to the discovery of the loaded hypodermics.

Haworth faces 12-48 months in prison at sentencing in August.

• A Sparks man denied charges Tuesday of urban mining that did $22,000 in damage to buildings in the Carson Valley Plaza in March.

According to court documents, a maintenance worker discovered the copper tubing from the heating ventilation and air conditioning unit above Famous Footwear had been stripped on March 10. It was soon discovered that several other units in the Carson Valley Plaza had copper cut free. Ropes that were used to access the roof were found hanging from the building and there was also blood from where the thief had apparently injured himself. The blood was collected and tested, which allegedly determined Arizmendi as a suspect.

Urban miners extract valuable metals and materials for their value. Often times, the precious metal is extracted from e-waste products such as electronic devices or ventilation units. In an investigation report, authorities stated that in many cases the theft is not discovered until someone tries to turn on their air conditioner or heating.