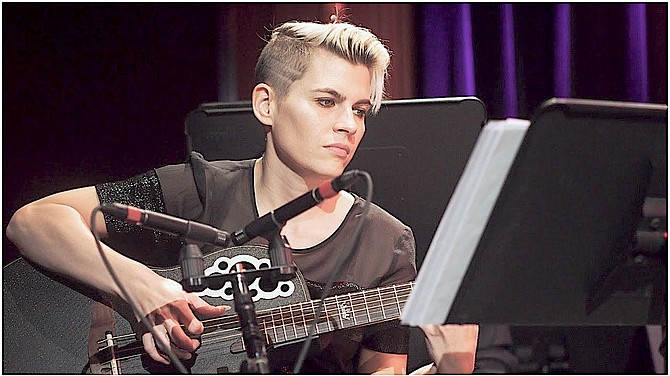 Guitarist Kaki King is known for a lot of things — her virtuosic technique, her experimental songwriting, her idiosyncratic sound and her futuristic multimedia shows, just to name a few.

She’s known for both her technical ability and the immersive, boundary-breaking quality of her music. Kaki King will perform 7 p.m. Feb. 4 at the CVIC Hall, 1602 Esmeralda, Minden.

She gets a lot of attention for her technique, which involves slapping the guitar, drumming her nails against it and more. But the hard part is the songwriting.

“When you’re an instrumentalist, finding your voice is really hard,” King said, “I want it to be identifiable as me.”

Composer and musician Kaki King is considered one of the world’s greatest living guitarists, known both for her technical mastery and for her constant quest to push the boundaries of the instrument. Hailed by Rolling Stone as “a genre unto herself,” Kaki has released nine albums and toured extensively, presenting in such prestigious arts centers as the Kennedy Center, MoMA, LACMA, The Met and Smithsonian Design Museum. She has created music for numerous film and TV soundtracks, including “August Rush” and “Into the Wild”, for which she received a Golden Globe nomination for Best Original Score. She has performed with symphonies and chamber ensembles, and recorded an album in collaboration with the Porta Girevole Chamber Orchestra commissioned by the Berklee College of Music.

On Feb. 4, King will perform songs from her most recent album, “Modern Yesterdays,” as well as material from throughout her career.