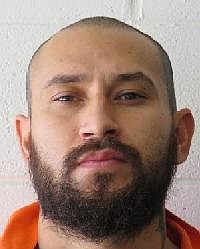 A Sparks man with a history of theft convictions admitted on Tuesday to residential burglary.

Oscar Daniel Montalvo, 32, faces 1-10 years in prison after he entered a Skyline Ranch home on July 23 with the intent to commit theft.

The residents reported someone had been inside while they were working out in the yard.

Fingerprints at the scene indicated Montalvo had been inside the home. He is scheduled to be sentenced on Feb. 22.

Prosecutors agreed they won’t seek habitual criminal status for Montalvo who has been in prison for robbery and possession of stolen property.

Montalvo was sentenced to 10 years in prison in connection with possession of a stolen vehicle in 2007.

His most recent conviction was November 2019 in Washoe County, according to the Nevada Department of Corrections.

• A man who was arrested Thanksgiving week for sales and possession of a controlled substance had a suspended sentence revoked after he admitted to several probation violations on Monday.

Adam Westmark, 32, was supposed to participate in Western Nevada Regional Drug Court after he received probation on a 12-30-month prison sentence for possession in April 2020.

He admitted on Monday that he’d absconded from that probation.

Prosecutor Erik Levin asked that Westmark not be transferred to the prison until his November charges are resolved.

• A woman who was arrested nearly four years ago on a drug charge received a suspended 12-30-month prison sentence on Tuesday.

Vallero absconded twice from supervision in the four years and had to be extradited on a $25,000 nationwide warrant after she failed to appear for two years.

She was originally arrested in April 2018 in a vehicle that had an ounce of methamphetamine inside. The driver was sentenced to prison for transport of a controlled substance.

• A man who had 11 different violations of his probation was ordered to serve 90 days in jail before he receives a dishonorable discharge.

Richard T. Cutright thanked the court for giving him the opportunity to go to Vitality treatment program.

Cutright said once he got out of the program, he’d pushed his other obligations to the back of his mind.

Cutright admitted in August 2019 that he had methamphetamine when he was arrested Oct. 16, 2018, after he was found slumped over the wheel of a running pickup.

He received probation, but returned to court in February 2021 after he tested positive for methamphetamine.