Presidential primary may replace caucus in 2024 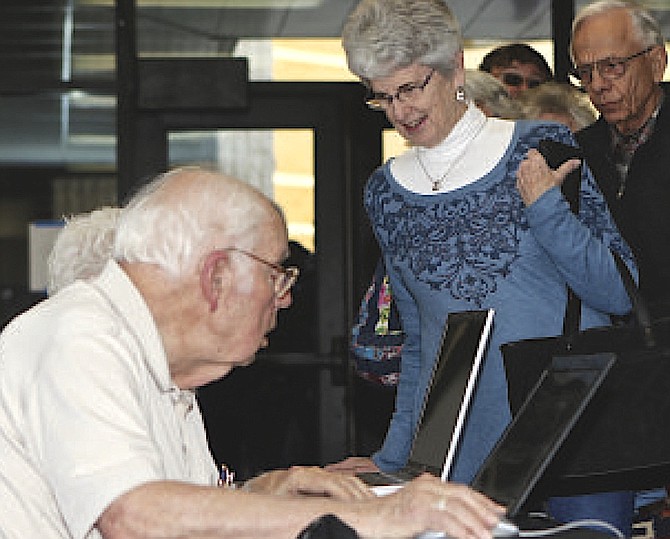 A voter checks in for the 2016 Republican caucus at Douglas High School in Minden. Brad Coman | R-C File Photo

After almost three decades, Nevada will once more try its hand at presidential preference election in February 2024, maybe.

Under a new law that took effect on Saturday, the major parties are required hold a presidential primary if they have more than one candidate in the race.

Under the new law the cost of the presidential primary will be paid for by the state and will only affect registered Democrats and Republicans.

“Election of delegates and alternates to the national contention must reasonably reflect the results of the presidential preference primary election if one has been held for the party,” according to the new law.

The last presidential preference primary was held March 26, 1996, and won by Sen. Bob Dole. Since then, parties have held caucuses to select a nominee, when one was required.

The last time both parties caucused to select a nominee was in 2016.

Nevada has been first in the West to select a nominee in an effort to increase the state’s value to candidates. Concerns about a presidential preference primary were cost and timing.

The primary was eliminated in favor of party caucuses preferred by party leadership. Rank and file members have complained since that they don’t get as much say in the outcome of those caucuses.

The law could be changed again when the Legislature returns to session in 2023.

The change is one of 55 new laws that took effect Jan. 1.

That measure is joined by SB292 which makes changes to how vacancies for federal and state legislative offices are handled. Current law, for example, allows the governor to appoint a replacement U.S. senator. The bill requires that appointment be someone from the same party as the former senator. In House elections, the candidate would be nominated in a special primary election.

For state legislators, SB292 gives more power to existing legislative leaders, requiring the replacement come from a list of nominees prepared by the minority or majority leader of the Assembly or Senate where the vacancy is. County boards would still make the final choice.

AB166 expands reporting requirements for persons, political action committees and parties that spend more than $100 for or against a candidate by including reporting of text message spending. It would also require those organizations to identify the source of the funds spent.

A smaller issue that won bipartisan support is AB121, allowing voters with disabilities to cast absentee ballots using the electronic system currently available to members of the military and Nevadans traveling abroad.

Other measures included the next step in Nevada’s attempt to create a Medicaid-like public health insurance option for all residents.

Assembly Bill 118 requires rear-facing car seats and booster seats. The law says children are to remain rear-facing in their car seat until they are at least 2 years old.

Additionally, children must ride in a booster seat or harnessed car seat until they are at least 6 years old or 57 inches tall.

Nevada law previously required that child passengers under age 6 who weigh 60 pounds or less be secured in a child restraint system. The new law amends that requirement with the new height specification, rather than weight.

Senate Bill 420 is designed to move forward on the 2019 legislation ordering a study of the feasibility of creating a “public option” that would offer all Nevadans health insurance at least comparable to Medicaid through the existing Silver State Health Insurance Exchange.

The insurance coverage could be purchased directly by individuals and by small employers.

SB420 directs the head of Health and Human Services, the head of the exchange and insurance commissioner to design and establish the “public option” plan.

The 2023 Legislature will have to deal with the thorny details of the plan, including how to pay for it.

A couple of measures concern suicides, particularly among younger people. AB181 requires better reporting by health officials of attempted suicides or threats of suicide. It bars insurance companies from imposing fewer benefits or charging more than they do for medical and surgical coverage.

SB390 is more ambitious, creating a suicide prevention and mental health crisis hotline those in crisis can access by dialing 9-8-8. Calls would be handled by a support center to coordinate a response. It encourages establishing mobile crisis teams.

The operation would be paid for by a surcharge on mobile and landline monthly phone charges. More funding would come from a fund to hold proceeds of state litigation concerning the manufacture, distribution, marketing and sales of opioids.

Measures to expand coverage of women’s health issues include AB196 expanding requirements to provide nursing mothers a private area to breast feed their infant in all Nevada courthouses.

SB190 would allow licensed pharmacists to sell hormonal contraceptives — the pill — without a prescription.

SB251 would require health insurance policies to cover assessments of women for susceptibility to breast, ovarian, tubal and related cancers. It would provide them with counseling services if indicated by the assessments and genetic testing if needed.

SB237 adds LGBTQ people and their businesses to the list of those entitled to receive detailed information and access to programs to obtain financing, loans to expand and access to contracts by public entities including cannabis licenses.

AB42 codifies into law the right of a defendant in a domestic battery case to have a jury trial. The Nevada Supreme Court made that ruling because a conviction prohibits the defendant from possessing, owning or having control over a firearm, a right guaranteed by the Second Amendment to the Constitution. The court ruled unconstitutional taking away such rights without a jury trial.

SB254 prohibits a college or the National Collegiate Athletics Association from preventing student athletes from being compensated for the use of their name, image or likeness. It authorizes student athletes to enter contracts with organizations other than their school or the NCAA.

AB286 aims to eliminate the manufacture, possession or sale of “ghost guns,” and the parts that can be purchased online to make unlicensed weapons. It bans unfinished frames and receivers that lack serial numbers and prohibits the possession or transfer of such weapons that lack a federal serial number. That law is already being challenged in court.

AB146 establishes that Nevadans have a right to clean water. It directs the state Environmental Commission to develop policies to control and mitigate water pollution into underground water sources including putting controls on contaminants. Permit holders would be required to report any spills.

In addition, the commission would have to consider any impacts on underserved communities when adopting water quality and effluent limits.

Similarly, SB108 mandates periodic training for those involved with juveniles in the juvenile justice system including implicit bias. It authorizes the Supreme Court to adopt rules for training for judges and employees of the juvenile court system.

Finally, AB349 tightens up the rules for getting one of several “Old Timer” license plates available from the state. Officials say many of those owners get the plates just to avoid passing smog tests on their vehicles. The bill limits use of those vehicles to 5,000 miles a year.