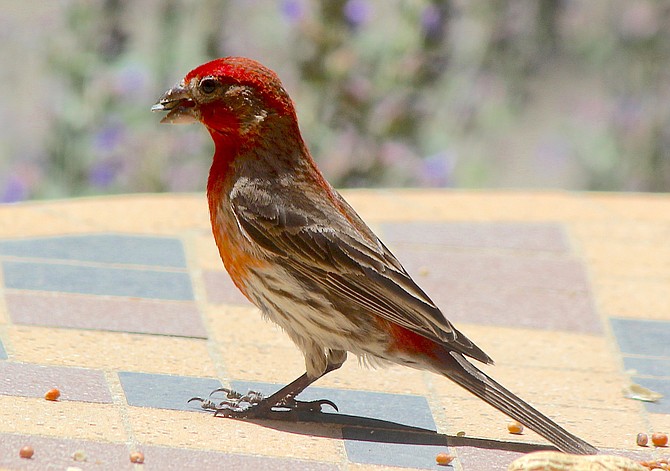 A house finch eats a seed from a table in Genoa last summer. Photo by Kurt Hildebrand.

Bird feeders have offered residents stuck at home due to the coronavirus an opportunity to commune with nature.

However, those feeders have also prompted warning from health and wildlife officials after finches have been found sick or dead from salmonellosis.

“Since December, the California Department of Fish and Wildlife and wildlife rehabilitation centers have been inundated with calls from residents who are finding sick or dead finches at bird feeders,” according to a notice issued last week by Alpine County Health Officer Richard Johnson.

“It’s happening all over the Western United States,” he said. “I hope the response is helping guide people to take down their feeders for a little bit and help the birds. People want to help the birds and they are inadvertently hurting them.”

The most affected birds are pine siskins, with lesser goldfinch and other finch species affected, too.

Birds become infected with Salmonella when they eat food, water or come into contact with objects contaminated with feces from an infected bird.

While the institute recommends taking down bird feeders to stop the spread of the disease, regularly cleaning the feeders is an alternative.

If you spot sick or dying birds, remove and clean feeders immediately and leave them down.

Richardson said the birds will be fine fending for themselves in the wild.

Tube feeders and thistle socks may reduce risk of transmission, but any feeders should be cleaned regularly, especially when the feeder is refilled, but at least once a week. Feeder cleaning involves soaking feeders in a 10 percent bleach solution, scrubbing, rinsing, and allowing them to dry.

The institute recommends having duplicate feeders so one set can be cleaned while the other is in use.

Complicating regular cleanings is that the disease can jump to humans.

The Centers for Disease Control issued an outbreak warning that eight people have been hospitalized and 19 sick from salmonella they contracted from feeders.

Feeders should be cleaned outside, if possible, and soaked in a bleach solution for 10 minutes. Cleaners should wash their hands whenever they touch a feeder.

Many bird-lovers elect to maintain duplicate feeders, so that they can deploy a fresh feeder while the other is being cleaned.