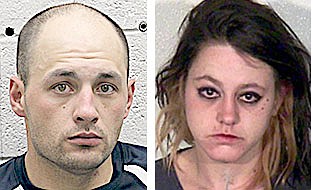 A couple arrested last week in Minden, after being tracked all over the county, is due to appear in East Fork Justice Court on Wednesday afternoon.

Richard Skyler Common, 29, and Celia Doyal, 25, were arrested on Dec. 28 after the discovery of an orange Jeep that had been reported stolen found abandoned in a ditch along Highway 395 that morning.

Deputies responded to help a Nevada State Police officer who spotted the Jeep near Ray May Way at around 6:30 a.m.

A Douglas County Patrol K-9 and deputies tracked the couple into Pine View Estates and then down to Courtland, where they got a ride to the Washoe One Stop in Indian Hills. They attracted enough attention that Washoe Tribe Police responded and though they were gone, security footage helped determine who they were.

They hitched another ride south to the Minden Holiday Inn Express, where Doyal allegedly took a cell phone, resulting in their arrest around 2:30 p.m.

According to jail records, Doyal is being held on $35,000 cash or bond.

According to court documents, Common told deputies that the Jeep was stolen from Fernley and that he’d taken another vehicle to get there.

Common was sentenced to 1-3 years in prison on a charge of attempted grand larceny in 2017, He was paroled in 2018, according to the Nevada Department of Corrections.

The Humboldt Sun reported in December 2020 that Common received a suspended 2-5-year prison term on condition he serve 364 days in jail on charges of felony theft and gross misdemeanor conspiracy to commit grand larceny of a motor vehicle.

He is being held without bail on a warrant out of Humboldt County and a probation hold.