Man faces at 6-15 years in prison in trafficking 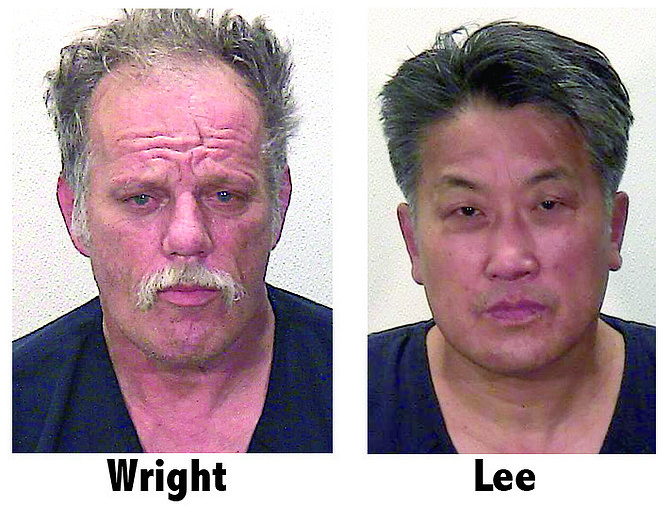 An April 3 jury trial was vacated after a California man admitted to trafficking a controlled substance.

Under an agreement, prosecutors will recommend a 6-15 year sentence and $1,000 fine.

District Judge Tod Young pointed out that the maximum sentence in the case could be up to 20 years in prison and a $100,000 fine.

Wright’s co-defendant in the case, Sung Soo Lee, 56, pleaded guilty in the case on Oct. 4 and is scheduled to be sentenced Jan. 3 on one count of conspiracy to violate the Uniform Controlled Substances Act.

Under an agreement, prosecutors agreed to recommend 2-5 years in prison. The maximum sentence on the charge is 10 years and a $10,000 fine.

Lee’s sentencing has been delayed twice. He was supposed to be in court on Dec. 20, but attorney Brian Filter said his flight from San Jose was delayed. Both men were taken into custody on July 7 by the Douglas County Sheriff’s Office Street Enforcement Team, Tri-Net Task Force and FBI Safe Streets Task Force after a drug sting was conducted at the Grant Avenue Walmart in Gardnerville.

• A man who allegedly waved at deputies during a high-speed chase south from the Pine Nuts to Mono Lake on Jan. 11 received a suspended sentence on Dec. 20.

Charles Qoroya Evanson, 39, appeared in district court where attorney Roger O’Donnell said he’d been in treatment since his release and would be in residential treatment in South Lake Tahoe.

“He has spent a great deal of time in treatment,” O’Donnell said. “He’s trying to get his life back in order.”

Evanson was convicted in Mono County of a charge similar to the eluding in Nevada on April 26 and was given probation.

Douglas deputies pursued Evanson down Highway 395 and into California, where California Highway Patrol officers used a spike strip to stop him near Mono Lake, before Mono deputies tackled him.

• A 34-year-old man faces a new drug sales felony in addition to a probation violation and a stretch in prison.

Michael Thomas Miller said he was sentenced to 14-48 months in prison after being arrested on multiple warrants in mid-November.

In January 2021 he admitted to possession of heroin and Ecstasy and sought drug court. Simple possession carries a mandatory probation.

Miller is also being held on a charge of first offense possession of a controlled substance for sale.

Attorneys said they hope to have a resolution to all of Miller’s cases. In the meantime, he was told he’ll have to return to Carson City for transfer to the prison.

Julian Amador has been held in lieu of $25,000 bail since his Sept. 19 arrest in connection with the charges.

Amador is accused of assaulting a girl over the course of three years he lived in Minden around 2016. The girl would have been 6-9 at the time and Amador would have been 15-18.

The waiver is not an admission of guilt and Amador will be free to enter a not guilty plea in district court.

• A convicted car thief is back in Douglas County for sentencing.

Richard Skyler Common, 30, was arrested Dec. 28, 2021, after he and Winnemucca resident Celia Doyal abandoned an orange Jeep in the Pine Nuts. The Jeep had been stolen from a Fernley gas station.

Common admitted a count of car theft in April and was allowed to return to Humboldt County to deal with charges there.

His probation was revoked on a prior theft charge and he was sentenced to 2-5 years in prison.

He is scheduled for a Jan. 30 sentencing.