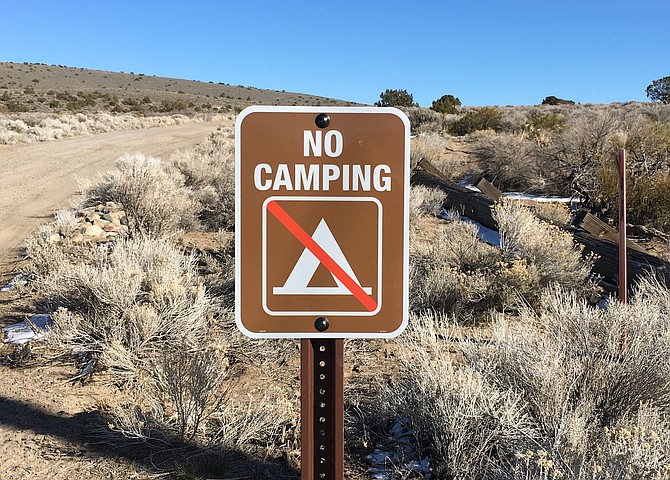 A no camping sign at the entrance to public lands at the top of Stephanie Way on Thursday.
Photo by Kurt Hildebrand.

No camping signs have sprouted along the edge of the Johnson Lane neighborhood in northeastern Carson Valley.

“Due to public health and safety concerns caused by continual, concentrated use of specific areas, BLM has determined the need to implement these camping restrictions in limited areas of public lands,” according to a social media post. “Most public lands in the Sierra Front Field Office will remain open to dispersed camping, if it does not conflict with other authorized uses or in areas posted ‘closed to camping.’”

Neighbors complained about campers after a large influx of RVs started squatting on public lands after the Caldor Fire.

The area around Hot Springs Mountain and at the top of Johnson Lane and Stephanie Way has been proposed closure since at least 1997. There is also an 1,100-acre site along the Pinenut Road access to BLM Land that could be closed in a few months should similar conditions arise.

Federal regulations require that campers move at least 25 miles every two weeks, but there isn’t a permit requirement or any official means to determine when someone showed up or where they were previously camping.

By implementing the closure, the BLM can move people who are camping in the closed areas further into the mountains, where neighbors won’t be affected.

Campers aren’t allowed to dispose of sewage, refuse, hazardous materials or pollute the area. The BLM asked that people follow Leave No Trace land use and to camp on sites that have already been cleared.

While BLM manages a significant portion of the Pine Nuts, there are several locations that are allotments owned by Washoe families.

Updated maps of the camping closure areas and information will posted at https://www.blm.gov/office/carson-city-district-office